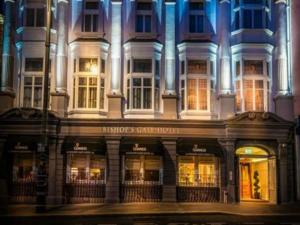 Northern Ireland's hoteliers should not be left at a competitive disadvantage as they plan when to reopen, the economy minister said.

Diane Dodds said she had enjoyed good conversations with ministerial colleagues and would return to the matter next week.

Accommodation owners have criticised the Executive for allowing them to take advance bookings without setting a date for when they can reopen.

Mrs Dodds said: "We don't want our industry to be at a competitive disadvantage to other industries in the British Isles."

In the Republic of Ireland, hotels should be able to reopen on a limited basis from July 20.

In England, self-catering cottages, Airbnb properties, and UK campsites, hotels and holiday parks will remain shut until at least the beginning of July.

Mrs Dodds said: "I have spoken to North American tour operators who said there was still an excitement about visiting us."

Economy Minister @DianeDoddsMLA says dates are not yet available when hotels can reopen. It comes as hotels can soon take bookings.
Ministers are considering an update on this and will provide more information next week
They are also looking at the issue of caravan parks and B&Bs pic.twitter.com/syS2OXUxEs

She said most tours planned but cancelled for this summer had been rescheduled for 2021.

Until then, the industry will largely be reliant on UK and Ireland staycationers.

Northern Ireland's air connectivity is a fraction of what it once was, and Belfast International Airport is planning to lay off workers.

Mrs Dodds said: "We are absolutely hoping for the quickest recovery that is possible.

"We are taking steps to try and build the economy going forward."

She admitted there had been a "huge slump" in economic output and demand.

The minister said viable businesses would be supported and the unemployed would be helped to re-skill.

She warned it was important to businesses that there was not a second wave of infection triggering renewed restrictions.

She added: "To rush forward then have to step backwards would be devastating for them.

"Businesses want to open safely in a structured way."