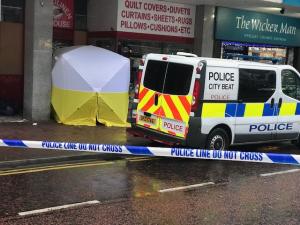 A homeless man has been found dead in the centre of Belfast.

He's thought to have been in his thirties and was discovered in the doorway of a shop in High Street around 8.30am this morning.

The emergency services were at the scene within minutes but the man was pronounced dead at the scene. 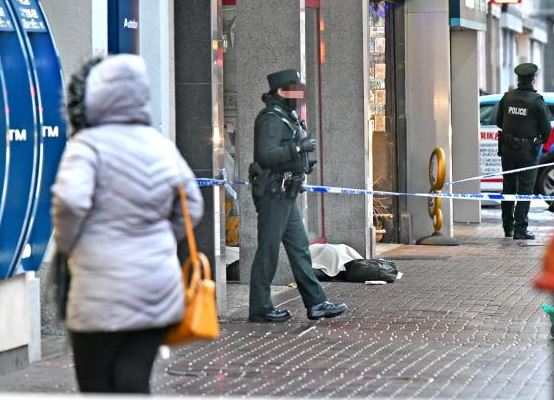 (Police at the scene on High Street, where a homeless man was found dead - Photo: Alan Lewis)

The Welcome Organisation which works with people living on the streets, confirmed it's Outreach team found the body earlier.

The charity's CEO Sandra Moore said: "I can confirm that staff members from the Welcome Organisation’s Street Outreach team found the body of a homeless male in a doorway in Belfast City Centre this morning.

“The person has not been formally named or cause of death ascertained but it was sudden and unexpected.

"Our thoughts are with the man’s family and friends some of whom are members of the homeless community and are very distressed and being supported by Welcome Organisation staff.

“It is tragic that people continue to die on our streets despite the wide range of support being offered.

"The sad reality is that the individuals involved in rough sleeping are amongst the most vulnerable in society: all too often suffering mental ill health, drug or alcohol addiction or all three.

"It is not at all uncommon for people in this category to choose to spend time street drinking or taking legal or illegal substances and then either choosing not to return  to their accommodation or take up the offer of a temporary bed in a hostel.

"While there is a pressure on beds in the city this doesn’t necessarily equate to the number of people sleeping rough.”

Meanwhile, Q Radio has been speaking to this student who came across the scene:

The body of a homeless man has been discovered in the doorway of a shop in Belfast city centre. pic.twitter.com/AFhUPbHaJt

A spokesperson for the PSNI says, "Police attended a report of a sudden death of a man at the High Street area of Belfast this morning.

"A post mortem is due to be carried out to establish the cause of death.

"Police enquiries are at an early stage and there are no further details at this time."