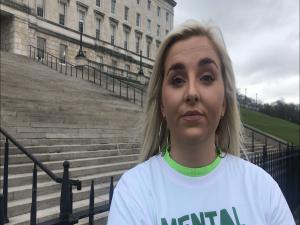 Helena Palmer, one of the organisers of the Storm Stormont rally

A number of campaigners with mental health groups joined the grassroots protest organised by Helena Palmer and Chloe Murphy, both 22.

The activists said they were motivated to organise the "Storm Stormont" rally by the high number of suicides in Northern Ireland.

People of all ages waved placards as they marched up to the gates of the Parliament Buildings.

They called on the newly restored Northern Ireland Executive to make mental health a priority and demanded more action from MLAs.

Miss Palmer said: "Everyone is sick of hearing about suicides and deaths and then nothing is done about it.

"We want our voices to be heard. There is an epidemic in Northern Ireland and there's so many people that suffer day after day and have to beg for help.

"People suffer in silence and are afraid to speak up because we all know there is such a stigma around mental health, and that's what we want to get rid of.

"We know nothing's going to change overnight, but we just want the Government to know that we're here and we do want change and we want it soon.

"We want something put in place for people, and to let people know we are listening to them.

"Mental health has killed too many people."

Miss Murphy said she was shocked by the number of people who joined the event on Saturday.

She told the crowd: "We didn't expect so many people, it's just unbelievable."

Speaking from the steps of Stormont, campaigner Karl Bennett told the crowd he has been touched by a mental health illness.

"Mental health is raised in the media by politicians, celebrities and many others, but we need action.

"We want to start to see less of that talking and see more about action that has been promised.

"I'm asking the minister for health Robin Swann to treat the mental health crisis as a health emergency in Northern Ireland.

"It's too little, too late for some."

Northern Ireland has the highest suicide rate in the UK, with figures showing five people take their own life every week.

Mr Bennett has called on the Government to establish a separate accident and emergency unit for mental health patients only.

"We need a proper support system because our mental health care system is not fit for purpose and not for what we need," he added.

He urged Mr Swann to speak to mental health support groups as well as health practitioners about the issue.

He added: "Mental health does not care about age, religion, colour, nor class, if you're rich or poor, live in the city on the country, it just seeks out the next vulnerable victim."

The Department of Health has been contacted for comment.