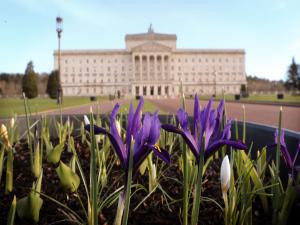 The Secretary of State for Northern Ireland has extended the talks process to form a new power sharing Government until May.

He said: Bilateral discussions between the parties and with the UK and Irish Governments will continue, in accordance with the three-stranded approach.

"All the parties have been actively engaged and some further progress has been made, including on the formation of an Executive and on legacy.

"There is, however, still a lack of agreement between the parties on a small but significant number of issues.

"The restoration of devolved government remains achievable, but more time and a more focused engagement on the critical issues are required.
The move also avoids negative headlines for the Good Friday target being missed following the historic Belfast agreement 19 years ago.

Mr.Brokenshire will have to take legislative steps to take controll of some devolved financial matters in the interim period.

Sinn Fein, The Democratic Unionist Party,  the Ulster Unionists, SDLP and Alliance -are involved in talks at Stormont Castle alongside the British and Irish Governments.

However, given the DUP and Sinn Fein's position as the two leading parties, devolution can only be restored if they can agree.

As well as an Irish language act and a commitment from the DUP not to block same-sex marriage, Sinn Fein want to see a Bill of Rights as outlined in the 1998 Good Friday Agreement introduced and the re-establishment of a forum to allow civic society to contribute to the political process.

Sinn Fein is also at odds with the UK Government on how to deal with the legacy of the Troubles.
James Brokenshire continued "On 2 March the people of Northern Ireland voted clearly for devolved government.

"The parties mandated by that election still have a duty to provide the government for which they campaigned.

"I believe that the outstanding issues between the parties are surmountable, but if no Executive is formed by early May, I will need to take further steps to ensure Northern Ireland has the political stability it needs.

"This is likely to mean, however undesirable, either a second election or a return to decision making from Westminster.”