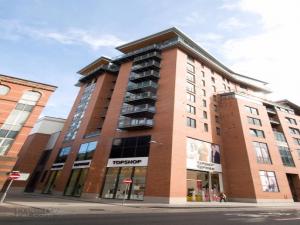 Residents of a high-end apartment block have been ordered to leave their homes immediately after a "serious structural issue" triggered a full evacuation of the city centre development.

Damage to a structural column prompted a partial evacuation of flats at the Victoria Square complex in Belfast earlier this year, but on Wednesday all residents were told they had to leave for safety reasons.

It is expected it will take 20 weeks to complete repairs at the development, which is understood to have around 90 flats.

A letter sent to residents on behalf of building managers McGuinness Fleck told them they would have to find alternative accommodation themselves - and warned that they may not be repaid for any costs in doing so.

The letter, a copy of which has been obtained by the Press Association, said: "The management company has been working to resolve a serious structural issue within the building that required the evacuation of a number of apartment occupiers along a damaged structural column.

"The situation has been monitored closely and the management company has been making efforts to have the damage repaired as soon as possible.

"However, due to the risk of further structural movement within the building, the structural engineers engaged by the management company have today directed that ALL apartments must vacate the building immediately for safety reasons."

The firm said it was working to fix the problem "as soon as possible" but warned "the management company is not in a position to give any assurances about costs at this time".

SDLP Botanic Representative Gary McKeown said: My first thoughts are with the residents affected by this evacuation. To be told to leave their home with immediate effect will be causing great shock and concern.

"While ensuring the safety of the public is paramount, it is essential that residents are supported over the course of the 20 week period expected for the repairs to be completed.

"I have contacted the management company seeking assurances that residents will get all the assistance they need."