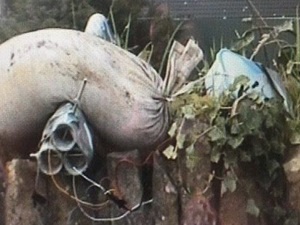 Detectives investigating the discovery of a mortar bomb pointed at a Northern Ireland police station have arrested a 33-year-old man.

The improvised explosive device (IED) was positioned close to a family home in Strabane, Co Tyrone.

The suspect was detained in the Strabane area on Tuesday.

The incident has been blamed on dissident republican group the New IRA.

Police Service of Northern Ireland Detective Inspector Andrew Hamlin said: "Our investigation is ongoing and I would continue to appeal to anyone who saw anything suspicious in the Church View area on the Friday night (September 6) or the early hours of Saturday morning to contact police.

"I believe an orange Fiat Sedici pizza delivery vehicle that was hijacked in the area of Mount Sion, Ballycolman, Strabane, at 9.40pm was used to place the device in Church View at approximately 9.45pm."

He said the vehicle was believed to have travelled along Mount Sion, Ballycolman Avenue, Bridge Street, Market Street and Church Street.

He added: "It was subsequently abandoned on Evish Road, Strabane."

Mr Hamlin urged anyone who saw the vehicle or has dashcam footage to come forward.