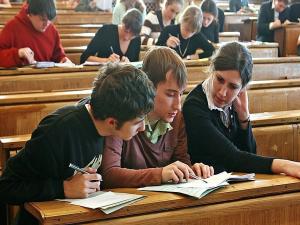 The proportion of students receiving the top grade at A-level has increased slightly in Northern Ireland.

Those awarded an A* rose 0.6 percentage points from last year, and almost a tenth received the top grade. The rise was mainly driven by better performance from girls.

Thousands of students learned their results on Thursday morning.

Entries for A-level decreased by 2.3%, broadly in line with the drop in the size of the school age population.

Maths was the most popular A-level, with one in 10 studying the subject.

Participation in Stem subjects (science, technology, engineering and maths) and languages (French, German, Irish and Spanish) declined slightly, by half a percentage point or less.

Justin Edwards, chief executive of the Council for the Curriculum, Examinations and Assessment (CCEA) in Northern Ireland, said pupils had performed well.

He added: "The proportion of students taking Stem subjects and languages has decreased slightly, however Stem subjects continue to account for over one-third of A-level entries in Northern Ireland."

Around 28,000 students received A-level and AS-level results. Many learned them online but others attended their schools.

Maths was the most popular A-level subject for boys and biology for girls. Business studies was in the top five for both genders.

A total of 8.8% of entries received an A* overall.

Girls outperformed boys at A* by 0.9 percentage points and by 3.2 points at grade A.

Overall, the school population declined by 2.6% at A-level.