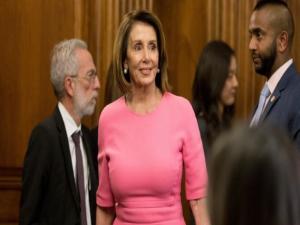 US House of Representatives speaker Nancy Pelosi has arrived in Dublin for a two-day visit to Ireland.

She was greeted by the country's deputy premier and foreign affairs minister Simon Coveney at the Department of Foreign Affairs on Tuesday afternoon, ahead of a meeting with Irish premier Leo Varadkar at Government Buildings.

Ms Pelosi is part of a delegation of high-ranking US politicians on a fact-finding mission to the country.

On Wednesday, Ms Pelosi will address TDs, senators and former politicians of the Irish parliament in the Dail chamber.

Later that day, the group will meet President Michael D Higgins and the Taoiseach will host a dinner at Dublin Castle in honour of the delegation.

The congressional delegation includes several members of the Friends of Ireland caucus, including Congressman Richie Neal.

The US politicians will also visit Northern Ireland.

On Monday, Ms Pelosi said there would be no chance of a US-UK trade deal if there was any weakening of the Good Friday Agreement.

Speaking at the London School of Economics, she said that the accord was a model that could not be bargained away in another agreement.

Ms Pelosi is the third most powerful politician in the United States.

Speaking ahead of the visit, Mr Varadkar said: "It's an honour to welcome the delegation from the US Congress to Ireland.

"This visit is more evidence of the deep and historic ties between our two countries and is a good opportunity to further deepen US-Ireland bilateral relations.

"We will discuss a range of issues including trade, visas, immigration and Brexit."