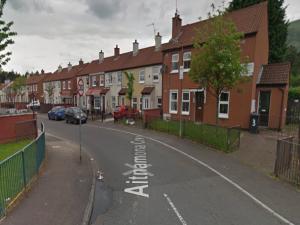 A 25-year-old woman and five-year-old girl were at home at the time of a gun attack in west Belfast.

Shots were fired at the house in the Aitnamona Crescent area yesterday (Wednesday) evening around 10pm.

No one was injured.

“The woman and girl involved in this are lucky to have escaped injury or even worse. Aitnamona Cresecent is a residential area and this attack will have caused great concern for those living there.

“Nobody wants guns on the streets. Those behind the shooting are clearly dangerous individuals who must be apprehended by the police.

“I would urge anyone with information on this indent to contact the PSNI or call Crimestoppers.”

Detective Inspector Mark McHaffie said: “We are carrying out a number of follow-up enquiries and we are particularly keen to speak to anyone who was in the area at the time.

“Anyone with information about this incident is asked to contact detectives at Musgrave on the non-emergency number 101, quoting reference 1317 19/04/2017. Information can also be given anonymously through the independent charity Crimestoppers on 0800 555 111.”