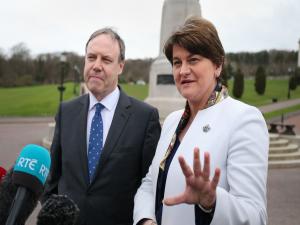 The Democratic Unionist Party (DUP) has accused Sinn Fein of not being serious about wanting to reach an agreement to restore the Stormont government.

Earlier, Sinn Fein's leader in Northern Ireland Michelle O'Neill said another Stormont election should be called after Good Friday, the deadline for agreement between the parties.

Ms O'Neill said there was little prospect of agreement on the way forward amid faltering talks with the DUP and British Government.

Speaking following another day of negotiations - on the 19th anniversary of the Good Friday Agreement - Ms O'Neill insisted Sinn Fein was "committed to trying to deal with the issues which are there".

"But post-Friday I think it is over to the electorate to have their say about the future.

"But clearly Sinn Fein want to make these institutions work, but they have to work for all our citizens."

DUP leader Arlene Foster hit back and said she doubted Sinn Fein was interested in making a deal.

"We did say to them that after some of the things they have said (recently) that we doubt they want a deal. That is very disappointing.

"They are telling their people one thing and when they are in here they don't seem to want to move and to compromise and to create the circumstances where we can go back into government," said Mrs Foster.

"It is Sinn Fein insisting on new demands being implemented - not about health, education or public services, but about narrow partisan issues which we don't think are in the best interest of the people of Northern Ireland .

"We are told this is about implementing previous agreements. But take Brexit. We have Sinn Fein now demanding special status for Northern Ireland.

"It is a ludicrous new demand which is clearly not in the best interest of Northern Ireland and is preventing the formation of government. That is one example."

SDLP leader Colum Eastwood accused the DUP of failing to grasp that there "needs to be respect for each other's identity".

"We are seeing little sign of progress but the Ulster Unionist Party is still here and want to get a deal by Friday because we believe it is achievable," he added.

Good Friday is the deadline for a deal and Northern Ireland Secretary James Brokenshire said he would make a call on the state of negotiations over the Easter weekend to enable him to move Westminster legislation once MPs return from recess on April 18.

After Friday, Mr Brokenshire will have to consider legislating to pass a budget for public spending in Northern Ireland and could introduce direct rule by ministers from Great Britain.

Two of the main stumbling blocks are the contentious issues of Irish language protections and how to deal with the toxic legacy of Troubles killings.

The two main parties are taking part in discussions along with Stormont's other three main parties, the Ulster Unionists, SDLP and Alliance Party, and the UK and Irish governments.

Devolution crashed in January over a row about the DUP's handling of the renewable heat incentive.