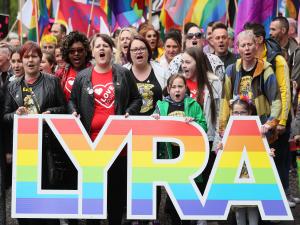 The partner of murdered journalist Lyra McKee made a public plea for same-sex marriage in Northern Ireland as she addressed a rally of thousands in Belfast.

Sara Canning told the crowds gathered outside City Hall that a law change would be a "win" for everyone in the region. 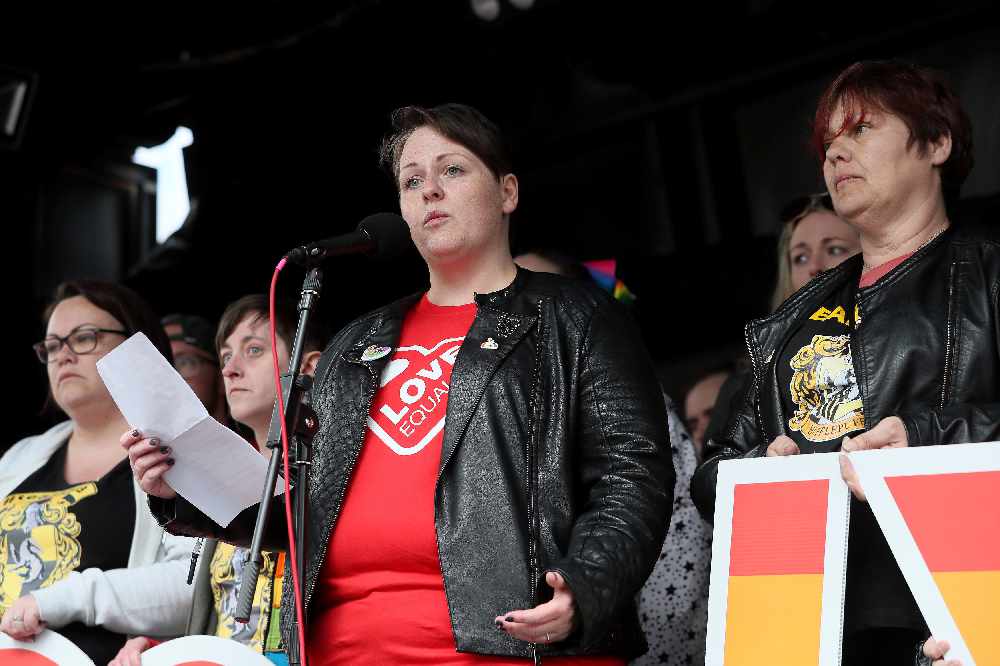 After being warmly applauded on to the stage, Ms Canning questioned why same-sex couple were treated differently in Northern Ireland than the rest of the UK, where same-sex marriage is legal.

"We pay our taxes, we are governed by the same laws, we live deeply and we love dearly - why should we not be afforded the same rights in marriage?" she asked.

"Equal marriage is not a green or orange issue, a demand of just one side or the other and it shouldn't be a political football.

"Same-sex couples come from every single political, religious, cultural, and racial background. A vote passing on equal marriage would not be a 'win' for any one side, it would be a win for all sides."

🎥 Sara Canning, partner of the late Lyra McKee, tells @Love_EqualityNI Marriage Equality rally outside @belfastcc City Hall: “We pay our taxes, we are governed by the same laws why should we not be afforded the same rights in marriage.” pic.twitter.com/6pKxn9HOq0

Police on the ground estimated that around 7,000 to 8,000 people took part in Saturday's noisy and colourful protest.

Ahead of the rally, Ms Canning had revealed that she challenged the Prime Minister on the issue when she attended Ms McKee's funeral in Belfast last month, urging Theresa May to step in and legislate on marriage laws above the head of the collapsed Stormont Assembly.

Ms McKee, a 29-year-old journalist and author, was shot dead by dissident republicans as she observed rioting in Londonderry on April 18.

The region's ban on same sex marriage is one of the key disputes at the heart of Northern Ireland's powersharing impasse, with the Democratic Unionists resisting calls from Sinn Fein for a law change.

The socially conservative DUP is firmly opposed to any redefinition of the law, insisting marriage should be between a man and a woman. A majority of MLAs were in favour of lifting the ban when the issue last came to the floor of the Assembly in November 2015, but the DUP triggered a contentious voting mechanism - the petition of concern - to block it.

Ms McKee's death has injected fresh impetus into political efforts to resolve the deadlock at Stormont, with the UK and Irish governments convening a new talks process in the hope of resolving stand-offs over same-sex marriage and other key sticking points, such as Irish language legislation.

Ms Canning was at the front as she and friends carried a large cut-out of Lyra's name in rainbow colours.

The event was organised by the Love Equality campaign - an umbrella group made up of organisations that support a law change, such as Amnesty International and LGBT health advocacy group the Rainbow Project. 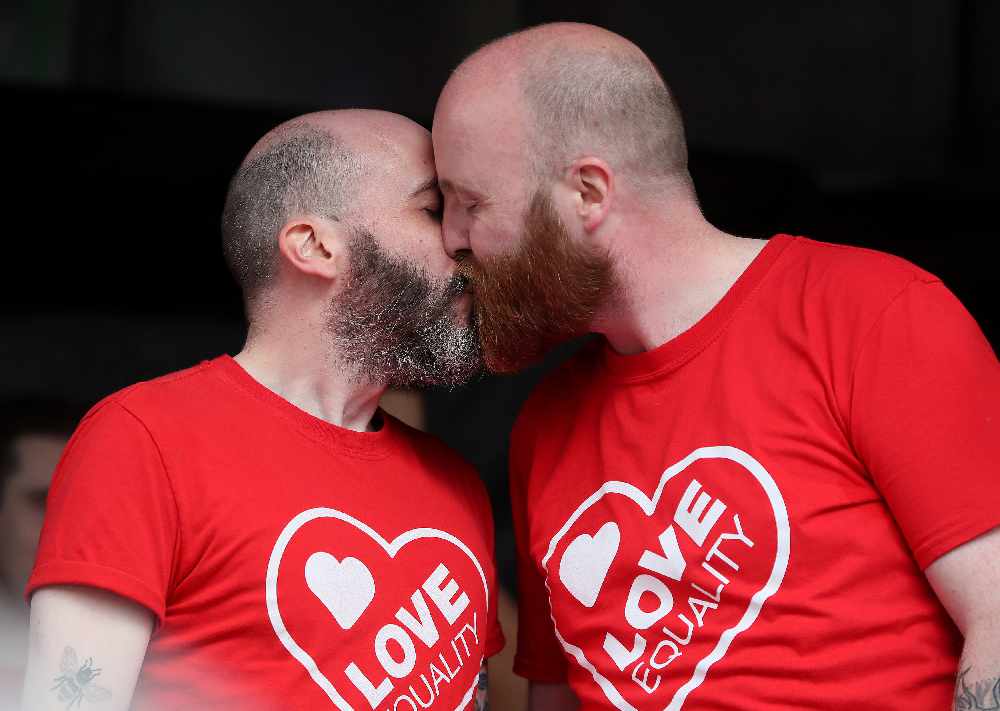 Rainbow Project director John O'Doherty drew a huge cheer from the crowd as he kissed his partner on stage as he addressed the rally.

"Like so many of you I stand today with my better half, the love of my life - angry and frustrated - that another year has passed without our love being recognised as equal under the law," he said.

"Another year of second-class citizenship and being ignored by those in power.

"No party or group of MLAs should hold a veto over people lives, over people's rights - and this campaign will not be held to ransom by those who seek to hold Northern Ireland back - who refuse to recognise the rights of LGBT people and our families.

"Our message is clear - any return of the Executive and the Assembly must include real reform of the petition of concern. Upfront reform, not an afterthought or a postscript to any deal or a can to be kicked down the road. We need a government for all the people, not just some people. No other government deserves our support.

"And to Theresa May, (Northern Ireland Secretary) Karen Bradley and the UK Government, our message is simple - human rights should not be based on postcodes.

"This is now happening on your watch. It is up to you to deliver on the promise of equality. Your kind words are no longer welcome - we judge you on your actions."

"But it is a city where loving couples are denied the right to marry by a government in Westminster which refuses to act to end years of discrimination.

"The UK Government likes to champion it's record on LGBT rights, but has shamefully ignored cross-party calls for progress on same-sex marriage in Northern Ireland.

"In our thousands, we send a message today from Belfast to London that second-class citizenship for the LGBT community has to end now.

"We must be heard and our calls for equality must be answered." 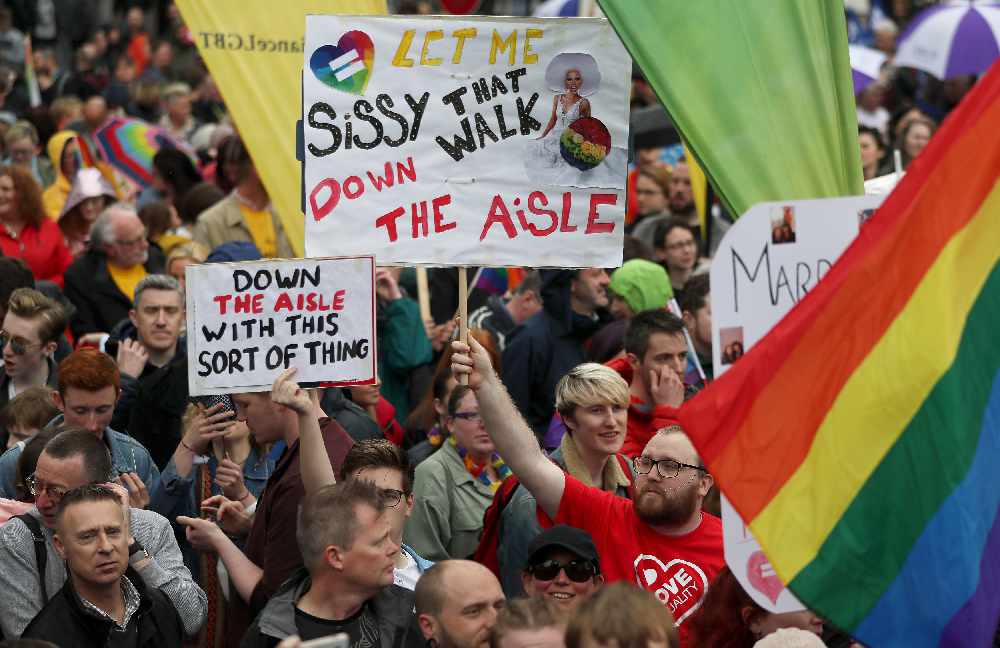