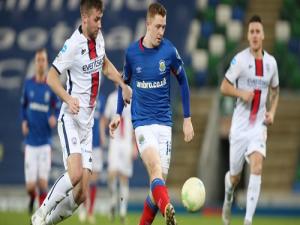 The holders Linfield have crashed out of the BetMcLean League Cup.

They went down 3-0 to Coleraine in Tuesday night's semi-final at Windsor Park.

The Bannsiders bounced back in style from recent defeats against the bottom two in the Danske Bank Premiership.

They hit all their goals in the second half to complete a hat-trick of victories against the Blues this season in league and cup.

He says they're not popping the champagne corks just yet...

Oran Kearney's men will play Crusaders in the decider on Saturday February 15th.

The Crues beat 10-man Institute 2-0 in their semi-final at Seaview.

Joe McCready was sent off for the visitors with half an hour to play.

Next up is a full set of fixtures on Saturday with crunch matches at the top and bottom of the league.

The club has issued the following information:

With December now underway, the core events of the seventh Glentoran FC Christmas Homeless Appeal are well underway. Since 2013, Glentoran Football Club has implemented a Christmas appeal to provide gifts, food, clothes and other necessities for members of the homeless community in Belfast and for pensioners and lower income families within the club’s home of East Belfast.

Events supporting the appeal this month are:

Sunday 8th December: players from the Glentoran first team squad, the treble cup winning Glentoran Women’s team and club volunteers will have a sleepout at the Oval from pm-midnight and afterwards at the Westbourne Glentoran Supporters Clubrooms until 7am.

Saturday 14th December: Final collection of items at Glentoran v Crusaders match at the Oval. The collection point will be located in the main carpark (at the directors' entrance) before and during the match.

Monday 22nd December: Hostel and Street Vigil: Players from the Glentoran first team and women’s team alongside club directors and volunteers will visit Belfast’s homeless centres and also the city centre to distribute Christmas gifts to those in need.

Jodie Killops of the Glentoran Milk Bar, who has led the Christmas Appeal for all of its seven years, said today: “Glentoran has been a community-based club since its formation in 1882. At Christmas the club, its volunteers and supporters want to once again give real, meaningful support to those all over Belfast who are less fortunate than us. The time we spend visiting homeless hostels last Christmas, has shown us just how much a visit and a small gift can mean to someone. We know that members of both the Glentoran Family and the wider East Belfast community will show their community spirit and donate as generously to the Glentoran Christmas Appeal for the Homeless, as they’ve done in previous years”.

Drop off points for gifts or other necessary items will be at the Glentoran Superstore or Milk Bar at the Oval, Parkgate Drive, and the Westbourne Glentoran Supporters Club, 3 Solway Street, Newtownards Road.

Opening hours for the Glentoran Superstore are available at https://www.glentoran.com/news/superstore-december-opening-hours

Plus, toys, of course.