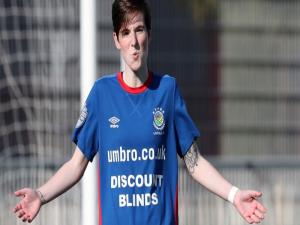 Kirsty McGuinness - on target, along with her sister! Pic: NIFL.

Linfield Ladies made it four wins from four in the Danske Bank Women’s Premiership with a convincing 5-0 victory over Cliftonville Ladies on Wednesday night.

Phil Lewis’s side grabbed all five of their goals before the break - captain Kirsty McGuinness netting either side of a Louise McDaniel strike to give the Blues a commanding lead.

Casey Howe and Caitlin McGuinness - sister of the skipper - added gloss to the scoreline in a game which ensured Linfield have still not conceded a league goal this term.

Glentoran Women bounced back from last week’s defeat against the Blues to also record a five-goal Belfast derby victory, seeing off Crusaders Strikers.

Demi Vance and Rachel Rogan both netted doubles for Diarmuid O’Carroll’s side before Yasmin White added a fifth late on for the Glens, who stay two points behind leaders Linfield.

Sion Swifts Ladies became the first team to hit double figures this campaign as they ran out 10-0 victors at newly-promoted Comber Rec Ladies.

The Strabane-based side are level on points with the Glens in second, with both having played one game more than Linfield.

Highlights courtesy of NIFL. Press below and enjoy!

VIDEO | Catch up with all the action from a high scoring week in the @DanskeBank_UK Women's Premiership with wins for @SionSwiftsLFC, @LinfieldLadies and @GlentoranWomen. #DanskeWomensPremhttps://t.co/LtQKo6821S

TWENTY goals tonight in #DanskeWomensPrem and top three pull away from the rest of the field with big wins for @LinfieldLadies @GlentoranWomen & @SionSwiftsLFC The Blues, the Champions lead the way - but it’s shaping up for a title race ... pic.twitter.com/4H5OHtTCc4