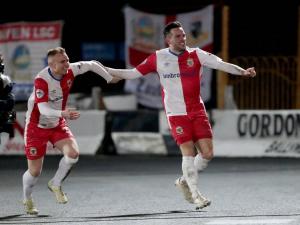 Linfield's star striker Andy Waterworth has ended speculation about his future by signing a new two-year deal with the club.

It's an early birthday present for the former Glentoran player who turns 33 on Thursday.

They're 12 points clear of Ballymena at the top with four fixtures remaining and only need a point from Saturday's home game against Crusaders to secure the Gibson Cup.

CONFIRMED! The news All Linfield fans have been waiting for - star man @Andy_Waterworth is staying at Windsor. LFC: “We are delighted to announce that striker @Andy_Waterworth has tonight signed a new two year contract with the club.” The boss looks happy too! @OfficialBlues pic.twitter.com/XCFSUudGPd

Staff staying ... new deal for popular ex-@Ballinamallard defender. LFC: “ We can also announce that central defender Mark Stafford has agreed a one year extension to his contract.” @OfficialBlues pic.twitter.com/lyEPR5gzFz

A genuine thanks to all @OfficialBlues supporters. Your messages of support truly mean a lot. Proud, privileged and humbled. #contract❤️⚪️🔵

“I’m delighted to be able to advise our supporters that two key players have tonight put pen to paper and signed richly deserved contract extensions with the club.

Both have been fantastic servants of this club over several years and both have shown their commitment to and faith in this club, going forward.

I know this news will be very well received by our supporters, as I know how popular and highly rated both players are.

It’s been great to get these contract negotiations concluded satisfactorily. These are exciting times for everyone at the club and these welcome contract extensions will help us plan for next season, once we reach the end of the current season.

Both Mark and Andy are experienced professionals who know our club inside out and I’m really looking forward to continuing to work with them in the future.

At training tonight there was a real buzz among all the players and I know how much they are all looking forward to a huge game at Windsor Park on Saturday so I hope a large number of our supporters will be in attendance to cheer all the lads on to the positive result we all want to help us achieve our goal for the season.”