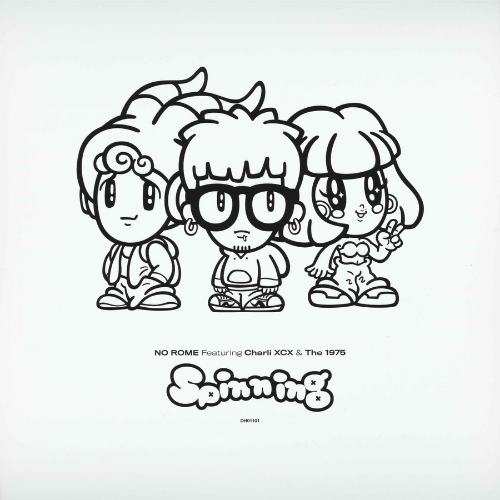 ‘Spinning’ is the new single from No Rome, featuring Charli XCX and The 1975. Produced by No Rome with Matthew Healy and George Daniel, the track is a slice of pure, joyful, escapist pop that is testament to No Rome’s inimitable talent and endless musical ability.  The single is accompanied by a 7" pink vinyl pressing featuring a remix of the track by A.G. Cook. Purchase it here.

The single follows a series of releases that have seen the Filipino pop star collaborate with Beabadoobee, Jay Som, Bearface and Dijon, seamlessly managing to incorporate each artist’s unique style with his own.

To accompany ‘Spinning’, No Rome has collaborated with Japanese artist Hideyuki Tanaka and designer Samuel Burgess - Johnson to create a visual world around the release, complete with animated characters for each artist and a psychedelic universe for them to inhabit.

Additionally, No Rome, Charli XCX and The 1975 have teamed up with NFT platform Foundation to auction original artworks designed by Hideyuki Tanaka & Samuel Burgess-Johnson and raise money for 3 different charities of the artists choosing. Rome will donate a portion of profits to Right Start, Charli to Girls Make Beats and Matty to One Tree Planted. The artworks are available to view now and bidding begins at 7PM GMT / 2PM ET / 11AM PT Friday here.

With the release of ‘Spinning’, the flood of support No Rome has seen over the last 12 months from BBC Radio 1, Apple Music 1, Vogue, The Face, High Snobiety, NME, The Guardian, DIY, Complex, Hypebeast, The Fader and Paper Mag to name a few, is only set to continue. With his highly anticipated debut album due for release later this year, 2021 is set to be No Rome’s best year yet.