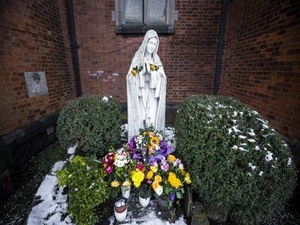 Our Lady Mary outside the Good Shepherd Catholic Church on the Ormeau Rd,Belfast which shared the site with Magdalene Asylum ran by Catholic Good Shepherd Sisters from 1867, with the Laundry closing in 1977. PA photo

The head of the Catholic church in Ireland has apologised and asked for the forgiveness of the survivors of the mother and baby homes.

Archbishop of Armagh Eamon Martin issued a statement after the publication of the research report on Mother and Baby Homes and Magdalene laundries in Northern Ireland, which revealed victims of rape and incest were put in facilities for unmarried mothers and their children.

The Bishop of Derry, Donal McKeown, warned that all records must be made available to people who want to know who they are.

“If anyone is trying to hide records or destroy records, that is a crime. Of course there is no reason why records should be withheld because people want to know who they are,” Mr McKeown told the BBC.

“They mightn’t like what they find out when they discover who they are, the parent may not want to know them, but people have to have access to as much information as possible.”

Earlier, Archbishop Martin said, “As a Catholic church leader in Ireland it is I who now feel embarrassed and guilty over the way in which we in the church contributed to, and bolstered, that culture of concealment, condemnation, and self-righteousness,” he said.

“For that I am truly sorry and ask the forgiveness of survivors. How did we so obscure the love and mercy and compassion of Christ which is at the very heart of the Gospel? Shame on us.

“The persistence and the powerful testimonies of these same courageous survivors has lifted the lid on this dark chapter of our shared history and exposed our hypocrisy to the glaring light.” 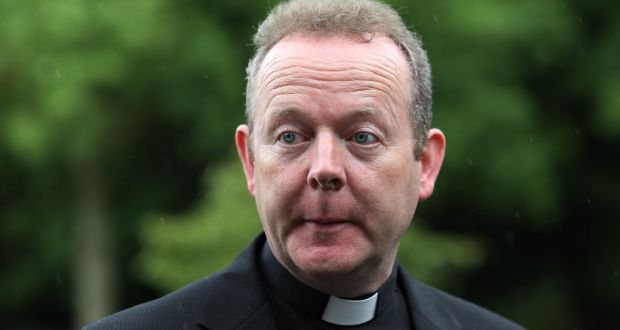 Archbishop Eamon Martin, head of the Catholic Church in Ireland

Apologies have also been issued by the Sisters of Our Lady of Charity of the Good Shepherd, the Presbyterian Church in Ireland and the Church of Ireland following the research undertaken by a team of academics from Queen’s University Belfast and Ulster University.

Their report features claims from women that they were subjected to labour like scrubbing floors during the final stages of pregnancy and were described as “fallen” and stigmatised.

Some survivors are pressing for a speedy public inquiry but there are concerns surrounding the impact on some who suffered life-changing trauma of giving evidence.

A “victim-centred” independent investigation was ordered by Stormont ministers and should be completed within six months.

First Minister Arlene Foster pledged the voices of survivors would be heard “loudly and clearly”.

She added: “It was not their fault that they were raped or the victims of incest yet they were the ones who suffered and it appears to me that those who perpetrated the crime went scot-free.”

Twitter thread within link below, including comments from First Minister Arlene Foster

“First and foremost, we want to offer our personal thanks to those women and their now adult children who came forward to contribute to the research. Your voices were silenced for so many years. That was a significant wrong.” pic.twitter.com/sRj0fYmpOB

Around a third of those admitted were aged under 19 and most were from 20-29.

Mrs Foster said: “It is with huge regret that we acknowledge the pain of those experiences and the hurt caused to women and girls who did nothing more than be pregnant outside of marriage, some of them criminally against their will.

“None of us should be proud of how our society shunned women in these circumstances and their experiences while resident in these institutions.”

Around 4% of babies were either stillborn or died shortly after birth across the entire period, the independent report ordered by Stormont ministers said.

Retired senior police officer Judith Gillespie led the review and said survivors would finally have control over their own choices.