DUP warns Theresa May it expects changes to her Brexit deal 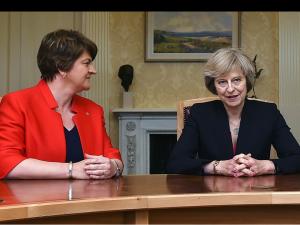 The Democratic Unionists have again warned the Prime Minister they will hold her to her word on securing changes to the Brexit deal.

DUP deputy leader Nigel Dodds was in Downing Street on Wednesday to reiterate his party's opposition to the proposed treaty's Irish border backstop.

The party, which sustains the Government in power through a confidence and supply arrangement, has heavily criticised a measure that would see Northern Ireland adhere to an EU regulatory framework if a wider trade deal between the UK and EU proves elusive.

It believes the measure would undermine the constitutional integrity of the UK by creating an economic border between Northern Ireland and Great Britain.

Mr Dodds, leader Arlene Foster and other senior DUP figures have called on Theresa May to secure legally binding commitments from the EU that would ensure Northern Ireland could not be held in such a backstop arrangement on an indefinite basis.

Mr Dodds' meeting at the Chief Whip's Office on Wednesday morning came ahead of this month's crunch Westminster vote on the deal Mrs May has struck with the EU.

The DUP has vowed to vote against the proposals in their current form.

After the Downing Street meeting, a party spokesman said: "The DUP has been consistent in these negotiations.

"The Withdrawal Agreement would undermine the constitutional and economic integrity of the United Kingdom.

"The Prime Minister has committed to secure changes.

"We will be holding her to her word.

"We want to work with the Government in the coming days to ensure the United Kingdom leaves the EU with a good deal."