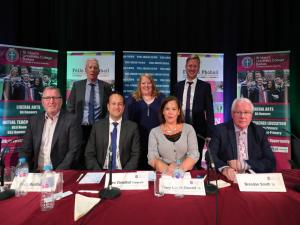 A vote on Irish unity would be divisive, the Taoiseach has said.

Leo Varadkar warned it could divide people along sectarian lines and may be defeated or only narrowly passed.

He said: "I think it would result in some of the mistakes made 100 years ago, when partition happened, being repeated but just the other way around - a huge number of people, those from a unionist, British, Ulster background, being brought into a united Ireland against their will."

He addressed a political discussion event in west Belfast on Tuesday evening.

The Feile debate turned into a feisty affair.

DUP MP Gregory Campbell made his feelings clear about the collapse of the Assembly.

But SDLP MLA Daniel McCrossan had a very different view...

The aspiration for Irish unity must be afforded the same respect in Northern Ireland as the desire to maintain the Union, the Irish premier earlier said.

Mr Varadkar said equal standing for the competing political goals was at the heart of the Good Friday Agreement's concept of parity of esteem.

The Taoiseach recently faced criticism from the DUP for talking about the potential weakening of the Union in the event of a no-deal Brexit.

DUP leader Arlene Foster accused him of engaging in "Project Fear mark two" and deputy leader Nigel Dodds claimed he was breaching the 1998 peace accord by "talking up" the prospect of unification.

On a visit to Northern Ireland on Tuesday, Mr Varadkar said he hoped Brexit would not bring "constitutional questions to the fore".

But he said the comments in Co Donegal last month which drew criticism from the DUP were about not "burying our head in the sand" and acknowledging that a no-deal Brexit could raise questions about the constitutional position.

He reiterated that he did not want to see a border poll in the near future.

"My position and that of the government has always been consistent that we don't favour a border poll at this time," he said.

"We believe there would be a high probability that it would be defeated and it would be divisive, I think, here in Northern Ireland.

"But it's not something I am looking for at the moment."