Minister vows to resist compensation for offenders with invalidated convictions 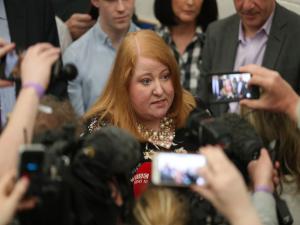 The Justice minister has vowed to resist any compensation claims from sex offenders whose convictions were rescinded due to a technical error.

Naomi Long apologised to the 17 victims impacted by the legislative gaffe which will see the convictions of 15 offenders ruled invalid because laws that allowed their cases to be heard in magistrates’ courts were inadvertently changed.

Eleven of the victims were children at the time of the offences.

Giving a statement to the Assembly, Mrs Long said officials were preparing a new legislative change to correct the error, which was made by officials in the Northern Ireland Office prior to the devolution of justice powers to Stormont in 2010. The NIO has so far declined to comment on the mistake.

The Justice minister also revealed that prosecutors had yet been able to track down two of the 17 victims to inform when of the issue, which was first made public last week.

Addressing MLAs on the controversy, Mrs Long said: “I want to express my deep regret that this has happened and to apologise to the victims who are at the heart of all of this.”

The minister said two of the 15 offenders were still on Sex Offenders Register.

Mrs Long was asked by Alliance Party colleague John Blair about the prospect of any of the 15 offenders taking legal action her department.

“If they were to try to seek in any way to be compensated for loss we would resist that compensation claim,” she replied.

“We do not believe that this is a case that these offences were not committed or that there was a miscarriage of justice where people were found guilty who were not guilty.

“We simply believe that people were found guilty in the wrong court, and therefore we will be resisting robustly any attempt by those who were involved in this incident to seek compensation in the future.”

The controversy relates to convictions for indecent assault and unlawful carnal knowledge.

All the defendants were tried in magistrates’ courts in Northern Ireland between 2009 and 2017. The offences were committed between 1973 and 2009.

One was handed a prison term while others received suspended sentences.

Prosecutors are now to deliberating on whether to pursue fresh prosecutions.

The convictions will be ruled invalid after it was discovered that a mistake was made in legislation introduced in 2009 as part of reforms of the criminal law relating to sexual offences.

The error saw three specific offences removed from the list of those that can be heard before magistrates’ courts in Northern Ireland.

As the mistake was inadvertent, none of the criminal justice agencies or relevant legal bodies in Northern Ireland were informed and they continued to deal with cases as they had previously, assuming the offences could still be dealt with by a magistrate.

That meant prosecutors opted to try the defendants in magistrates’ courts – with the consent of all 15 – at a time when the incorrectly drafted legislation dictated the cases could only be heard in a crown court.

Mrs Long was asked by several MLAs whether rescinding the convictions would mean offenders could secure positions or jobs they would have previously been unable to.

The minister said the convictions would be removed from the National Police computer database and would not be automatically disclosed on an Access NI check.

However, she said if an individual was barred from working with vulnerable groups as a result of their conviction that bar would stand.

She said the information about the individual would also be retained on a police intelligence database and police chiefs had the authority to disclose that information if requested as part of an Access NI check.

“There are checks and balances in place to ensure that as a result of this the public will be protected,” she said.

The minister said it was important to view the mistake in context.

“I want to reassure victims that of all the cases that have been tried, this is a very unique and specific error,” she told the Assembly.

“And I would ask members to caution themselves before they try to make this sound as though the whole justice system is in disarray. You do victims a disservice when you go down that road.