Poots endorses criticism of lockdown move in reply all email 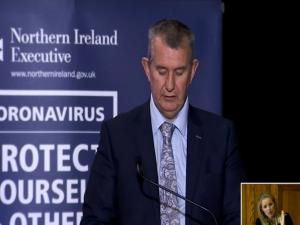 Edwin Poots has endorsed a highly critical assessment of the executive’s lockdown decision in an email circulated to dozens of Stormont MLAs.

The DUP minister used the ‘reply all’ function in replying to a message a member of the public had sent to elected representatives in the Assembly.

In his reply, Mr Poots said he “entirely agreed” with an email that referenced the “utter incompetence” of NHS and Health Department planning.

The sender also claimed the NHS being overwhelmed in the winter was not new and it happened every year.

He questioned whether the lockdown was rational and claimed medics had not planned for a second wave of the virus.

The sender questioned why MLAs believed local medical representatives and academics over those who advocated what he alleged was a successful non-lockdown strategy in Sweden.

In his reply, Mr Poots, a past critic of the executive’s lockdown strategy, said: “I entirely agree, unfortunately the majority of the Executive see things differently.

“Once again Edwin Poots is performing his own twisted version of the blame game,” he said.

“A few days ago he was pointing the finger of blame at the nationalist community for Covid-19,” said Mr Chambers.

“Now he’s blaming the health service and in the process insulting everyone within it who is working so hard at this particular time to save lives.

“The fact that Edwin Poots says ‘I entirely agree’ with someone stating that what the health service is facing now is ‘nothing new’, that advice should be taken from ‘more than the medical community’, and cites Sweden as an example of good practice shows how detached from reality he is.

“It’s a widely accepted fact that one of the main reasons our health service is struggling during this pandemic is down to staffing levels.

“Edwin Poots was the health minister for a number of years when this staffing shortfall was developing.

“If he really wants to look for people who are responsible he might want to start by looking in the mirror. Whole swathes of Europe are currently in lockdown because of the second wave of Covid-19, but unfortunately some DUP deniers seem to think we can magically avoid taking tough decisions.

“Edwin Poots needs to get real and stop playing pathetic political games in the middle of a global pandemic which has already delayed crucial life-saving decisions. His words and actions are grossly irresponsible.”