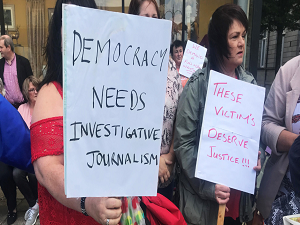 A rally has taken place for victims of alleged child sexual abuse in Fermanagh.

The police initiative was triggered by a series of reports in a newspaper, which has provided a platform for victims to tell their stories over several months.

The Impartial Reporter newspaper, based in Enniskillen, has spoken to numerous people who have recounted their experiences of historical sex abuse in the county as far back as 40 years ago, many identifying bus driver David Sullivan as their abuser.

The newspaper now says it has received allegations of at least 60 perpetrators.

Those attending the rally in the town centre on Saturday said that children in the area had been "robbed of their childhood" by "savages" and that the alleged criminality deserves thorough investigation and they will continue demanding answers.

Protesters held signs which read "PSNI must act!" and "Sexual abuse is a crime, leave no stone unturned."

Caroline Wheeler, a victims advocate, spoke at length about her own experience of child sexual abuse, and encouraged more victims to come forward, not to be afraid of speaking out in an effort to bring those who abused them to justice.

"Together we stand united to have a full stop to child sexual abuse," she added.

Rally organiser Donal O'Cofaigh said the rally was to call on the PSNI to act on the allegations more quickly.

"We will not stop until these allegations pass the threshold of the courthouse steps," he said.

"We will mobilise, we will continue our campaign and we will have to ask questions.

"The police are investigating, we have to see where that leads but we cannot accept a continuation of the situation where there's more than 60 alleged child abusers who are unaccountable to the law."

Political representatives also attended from a number of parties in a show of support.

Sinn Fein's Chris McCaffrey said the PSNI has shown blatant dismissal of victims and added to their suffering.

"We all have a role to play, to say or do nothing is not to be neutral, but to take the part of these predators," he said.

The rally also hailed the work of local journalism, the journalist who broke the story, Rodney Edwards, and said the expose underlines why regional newspapers are essential to their community.

"Working with and supporting victims to provide their evidence is central to this work and specialist child abuse detectives are diligently working with victims and gathering and reviewing evidence."