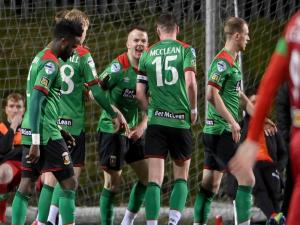 Glentoran moved into second spot in the Danske Bank Premiership on Tuesday night by beating Cliftonville 2-0 at Solitude.

Rory's brother Jay Donnelly was also on top form against their previous club.

Meanwhile, Larne crashed to a 2-1 defeat at Portadown and Glenavon had a 4-3 victory away to Warrenpoint.

Confirmation @Glentoran move into the 2nd spot with six games remaining after a big win at Solitude.

Final games before the split this weekend. #DanskeBankPrem

Derry City drew 1-1 with Dundalk in their League of Ireland game at the Brandywell.

There was big news for the IFA earlier in the day:

He's the third from Northern Ireland to get the job, following Harry Cavan and Jim Boyce. pic.twitter.com/hlnSbIhVqa

Gaelic Games is getting set for a long-awaited return to action: