The wait is almost over, MARVEL UNIVERSE LIVE rolls into Belfast this THURSDAY 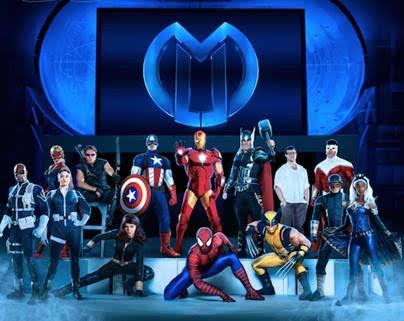 This show is taking the live entertainment experience to a whole new level, with an epic show unlike anything seen before. Bringing together the largest assembly of Marvel characters in a live production, audiences will be able to watch some of their favourite Marvel Super Heroes step out of the silver screen and onto the stage - bringing the action to life right before their eyes.

Everyone will be able to cheer for  their favourite Marvel Super Heroes, including Spider-Man, Iron Man, Hulk, Thor, Black Widow and more, as they battle Loki and Marvel’s most sinister villains in a live, action-packed arena performance for the whole family. It’s being hailed as the most technically advanced live show ever, with cutting-edge special effects, pyrotechnics, aerial stunts, martial arts, motorcycles and more.

From the creative team that brings you such arena spectaculars as Disney On Ice, Feld Entertainment Inc, the world’s leading producer of touring live entertainment is excited to announce the UK tour of Marvel Universe LIVE! This arena stunt spectacular will be swinging into seven major UK cities - Nottingham, London, Birmingham, Glasgow, Sheffield, Manchester and Belfast – for an electrifying run of over 40 shows that have already entertained almost 2 million families in over 65 US cities to date in its first tour.

The wait is almost over, @MarvelOnTour THIS week
Last remaining tkts released 4 sale TODAY at 9am
Call @SSEBelfastArena box-office 90 709074 pic.twitter.com/i0vXLdhmAz

“We are delighted to bring Marvel Universe LIVE! to the UK, giving families an opportunity to enjoy this spectacular live show for the very first time. The audience will feel like they’ve been transported into a jaw-dropping Marvel blockbuster film, with an engrossing storyline and non-stop stunts”, said Steven Armstrong, VP of Europe North at Feld Entertainment, Inc.

Featuring over 50 cast members and taking over two years to research and develop, Marvel Universe LIVE! utilises some of the latest innovations in arena set design and aerial pyrotechnics, with stunts developed by the team from Hollywood blockbuster, Thor, and the recent The Amazing Spider-Man films. The set includes innovative lighting design, transformative 3D projection, 21 projectors, the largest flying system ever used for a live arena tour and the debut of a new Spotlight Tracking System.

Marvel Universe LIVE! begins its quest across the UK on Thursday 8th September 2016 at Motorpoint Arena Nottingham, before visiting The 02 in London; Barclaycard Arena in Birmingham; the SSE Hydro Arena in Glasgow; Sheffield Arena; Manchester Arena and The SSE Arena, Belfast.

“To see all the elements of this spectacular live show come together has been truly incredible,” said Marvel’s Chief Creative Officer Joe Quesada. “The technology utilised in the show is not only going to blow your mind, it is going to take you to a whole new Marvel world like nothing British families have ever seen before.”

Join Marvel families for this monumental performance. The fate of the universe depends on it!

The website features the complete list of UK tour dates and fans can check the latest news and announcements via social media: