Apprentice Boys parade in Derry/Londonderry cancelled due to COVID-19 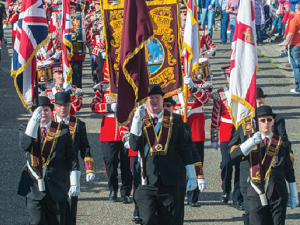 The Apprentice Boys parade in Londonderry in August has been cancelled due to Covid-19.

Organisers of the annual loyal order demonstration expressed "great disappointment" but said they had a duty to protect health and well being.

Senior members were instead urged to consider placing floral tributes at local war memorials to remember the sacrifice of their predecessors and pay tribute to brethren who died in all conflicts.

An Apprentice Boys statement said: "It is with great disappointment that the officers of general committee have taken the decision to cancel the annual procession to commemorate the Relief of Londonderry, scheduled to take place on Saturday August 8 2020.

"Please be assured that we did not come to this decision lightly, however after liaising with key stakeholders and acknowledging the restrictions and advice offered by the First Minister, it became clear that as a responsible organisation we could not continue with our traditional parade during these unprecedented times.

"We understand that this news will be disappointing to many, however as the global Covid-19 pandemic persists, we believe we have an obligation and duty to protect the health and well being of all members, band participants, visitors, traders and citizens."

Members of the organisation recently made a donation of vital food, water, clothing, health and cleaning products for the staff and patients fighting the Covid-19 pandemic at Altnagelvin Hospital in Londonderry.

Each year the Apprentice Boys of Derry celebrate the closing of the walled city gates by 13 apprentices against the army of the Catholic King James II in December 1688.

Their August parade marks the date the city was relieved after a 105-day siege during which about 10,000 died.

It attracts thousands of members of the loyal order and bandsmen for a march before a religious service in St Columb's Cathedral.

The Orange Order has already decided to cancel its Twelfth of July demonstrations due to the continued risk posed by the virus.