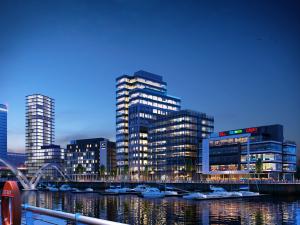 Belfast Harbour has announced ambition plans to become the best regional port in the world and to pump more than a quarter of a billion pounds into the project, which will create 7000 new jobs.

The 2019-2023 Strategic Plan, together with an outlook through to 2035, were revealed at an annual stakeholder meeting this morning.

The port says it is committing £254 million pounds to deliver new estate infrastructure including making the shipping channel deeper and attracting larger ships and cruise liners.

It has also proposed creating an iconic waterfront for Belfast, that will be an attractive place for people to live, work and visit, as well as a hub for inward investment and tourism.

Research from Ulster University has concluded that these investments will generate 7,000 new jobs and support a further 3,500 construction jobs.

If it succeeds it will generate an £500 million gross value added for the Northern Ireland economy, an additional £300 million in wages and £4 million in rates to Belfast City each year.

The project is planned over the next five years and will lay the foundation for even more substantal "once-in-a-generation" investments.

“Belfast Harbour has been enabling local businesses to succeed and trade with the outside world since it began over 400 years ago.

"The purpose of our plans is to make sure we are fit for purpose to handle and benefit from the technological, economic and social changes taking place in the 21st century.

“We want to become the world’s best regional port and create an iconic waterfront district for Belfast which will be an attractive place to live, work, visit and invest in.

"This will bring huge benefits for our customers, the regional economy and all our citizens. We can’t deliver our ambitious plans by ourselves which is why a partnership approach is a key part of our strategy.

"If Northern Ireland is going to be competitive on the global stage then we need to work together, collaborate more and invest in key infrastructure.

“Over the next five years Belfast Harbour intends to invest £254 million in new Port and estate infrastructure and facilities.

"This major investment programme is really only possible because of our Trust Port status which allows us to reinvest every penny of our net earnings back into the business.”

A number of real estate projects will also be completed, including 'City Quays 4', a 250-apartment build-to-rent development.

Over the longer term the ambition is to significantly enhance the Port’s capacity to attract new trade and manage the next generation of shipping by deepening the Victoria Channel and developing new quays and wharves.

Belfast Harbour also wants to create an iconic waterfront district with attractive public spaces that is integrated into the rest of the city.

This will potentially include new cross-harbour bridges, a water taxi service and opportunities for new tourism, leisure and cultural projects.