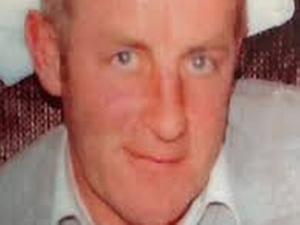 Gardai investigating the disappearance of a man from his home in Co Monaghan 18 years ago believe they have found his car in a lake in Co Fermanagh.

Gardai said on Tuesday that a significant development was made after a car was recovered from Lough Erne.

The discovery came after members of the public uncovered what gardai described as an anomaly in the water on Monday.

These men were aware of the gardai renewed an appeal for information regarding the location of Mr Lynch's car earlier this year.

Shortly after 2pm on Monday police divers carried out an underwater search of the lake and discovered that a car was submerged.

The vehicle has been recovered for examination and is believed to be the Mitsubishi belonging to Mr Lynch.

As part of the renewed appeal into the disappearance of Mr Lynch in January of this year, An Garda Siochana conducted searches at 10 lakes in Co Monaghan.

These searches were to continue and were to include lakes in and around the border region, however the searches were suspended in March 2020 because of the Covid-19 pandemic.

Inspector Graham Tolan of Monaghan garda station said: "An Garda Siochana will continue to investigate missing persons cases for as long as it takes.

"In this case An Garda Siochana have been searching for Mr Lynch for 18 years.

"We are grateful to the members of the public who alerted us to this anomaly in the water.

"I'd like to remind the public that small pieces of information, no matter how insignificant they may seem, can often prove vital, as is the case today.

"We will continue to work with police in Lisnaskea who are investigating the circumstances surrounding the discovery."

A family liaison officer attached to An Garda Siochana has been appointed and is liaising with Mr Lynch's family.