Arrests made as anti-mask protestors gather at Stormont 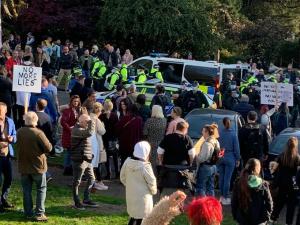 Arrests have been made after more than 300 people gathered at Stormont to demonstrate against coronavirus regulations.

It comes as Northern Ireland is facing four weeks of tight restrictions on movement which the Executive approved to try to halt a dramatic increase in cases over recent weeks.

Pubs and restaurants will close for four weeks, with the exception of takeaways and deliveries, while schools will close on Monday for two weeks, one of which will cover the half-term break.

The measures do not amount to a full-scale lockdown similar to that imposed during the first wave of the virus, but they mark a significant ramping up of the administration’s response to spiralling infection rates.

Police monitor protestors who gathered at the Massey Avenue entrance to Stormont today to highlight their opposition to Coronavirus restrictions announced by the Executive. pic.twitter.com/FbA8Xi6YZB

Protestors gathered at the Massey Avenue entrance to Stormont today to highlight their opposition to Coronavirus restrictions announced by the Executive. pic.twitter.com/8dG3xSK75j

As demonstrators gathered to express their opposition to the regulations in the grounds of Stormont, the Police Service of Northern Ireland (PSNI) were in attendance.

Using a loudspeaker, officers read out a warning to those gathered of a risk of prosecution under the coronavirus restrictions against large groups meeting outside.

The latest regulations prohibit mass gatherings, stating that no more than 15 can gather outside.

The PSNI confirmed that arrests were made and fines handed out at Stormont on Sunday.

“The numbers in attendance and the lack of social distancing in the crowd were in stark contrast with assurances given to police by the organisers in the days leading up to the event,” he said.

“Police engaged with the organisers before and during the protest in an attempt to encourage them to disperse and comply with the Health Protection Regulations. Unfortunately both the organisers and participants did not cooperate with these requests and continued in breach of the regulations.

“Officers therefore moved to enforce the regulations resulting in the issue of fixed penalty notices and a number of arrests. We will also conduct follow up enquiries to seek to identify others who may have committed offences.”

Mr Todd added: “As I have said previously, in other times, we would work with organisers and protesters to facilitate lawful and peaceful protests, however, these are not ordinary times.

“The Health Protection Regulations, particularly at this time with increased restrictions in place, are there to protect us all during this pandemic and it is everyone’s responsibility to adhere to them to protect our society.”

Questioned about the gathering on social media, Justice Minister Naomi Long said she raised the event with the Finance Minister Conor Murphy, whose department is responsible for the Stormont estate, and the PSNI Chief Constable last week when she became aware of it.

She commented: “You can’t stop people arriving … What action has been taken isn’t something I have been briefed on yet.”