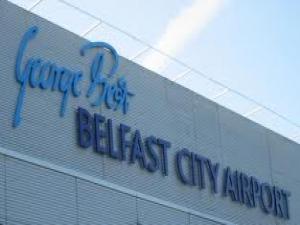 Diane Dodds said strategic interventions were needed from the UK Government to sustain the air transport industry in the wake of the Covid-19 emergency.

Earlier this month, the Government joined with the Executive to provide a £5.7 million package to sustain routes at Belfast City and City of Derry airports.

Diane Dodds says they are receiving help from the Department of Transport with the issue of air connectivity.
She adds "strategic intervention" is required from the UK government, particularly in regards to Air Passenger Duty, the tax added to flight tickets in the UK. pic.twitter.com/eBevQnDc4q

Airports in the region have long campaigned for an end to APD - an excise duty charged on UK passenger flights - claiming it puts Northern Ireland, as a region so reliant on air travel, at an unfair disadvantage.

Ministers secured powers to scrap long haul APD in Northern Ireland in 2012, but have to pay back a set £2.3 million to the Treasury every year to account for lost tax take.

That policy was thrown into question this week when it emerged that Stormont continues to pay this sum despite the last long haul service ending in Northern Ireland in 2018.

Cutting short haul APD across the UK as a whole would mean Stormont would not be have to make a Northern Ireland-only return to the Treasury.

At Friday's daily Covid 19 briefing, Mrs Dodds declined to be drawn when asked if it was sustainable for Northern Ireland to continue to operate three main airports in the post-virus era - Belfast City, Belfast International and City of Derry.

She said the airports were going through an "incredibly difficult period", but highlighted that the vast majority of visitors to Northern Ireland from Great Britain travelled by air rather than ferry.

"So air connectivity is hugely important," she said.

"I've also been making the point that not only do we need to recover the routes but we need strategic interventions from the Government at a national level to make sure that that air connectivity is supported right throughout the United Kingdom."

Mrs Dodds said she had been in regular contact with colleagues across the devolved regions on the issue.

"We've had a long-term campaign to look at air passenger duty and I think that we need to look at that strategically at a national UK level so that all regions of the United Kingdom can be properly connected," she said.

"I am working to develop the executive's road map to a strong competitive and regionally balanced economy," she said.

"I will bring a paper to the executive next week which will outline on how we put the pathway to recovery into action."

She said she had been working with business leaders to identify the sectors the recovery plan should focus on. She flagged cyber security, fin-tech and digital start-ups as key priorities.

Mrs Dodds also announced that the executive's £25,000 grant scheme for retail, hospitality, tourism and leisure industry businesses would be expanded to include those businesses that occupy rental properties.

In addition, the minister said an already announced £40 million fund to support microbusiness in Northern Ireland would open next week to applications.

In regard to employee concerns about returning to safe workplaces when certain businesses reopen, Mrs Dodds warned employers that social-distancing requirements were "non-negotiable".