DUP to elect new leader and deputy leader next Friday 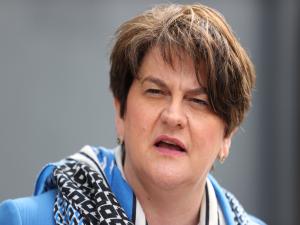 Arlene Foster - set to be replaced.

The DUP has announced it will meet to elect a new leader next Friday.

In a statement, chairman Lord Morrow said party officers have agreed the contest to elect a leader and deputy leader will be held on Friday May 14.

Nominations for both roles will close on Thursday May 6.

DUP officers have decided the vote to elect a new leader and deputy leader will take place on Friday 14th May at 11am. pic.twitter.com/Z28rv4Gc3K

Lord Morrow said only party members who are also Assembly members or MPs will be eligible to vote in the contests.

He said the meeting will be conducted virtually due to the ongoing restrictions on gatherings under the coronavirus regulations.

“Following this online meeting a voting station will open and voting will be by secret ballot.”

The winners are to be announced at 5pm on May 14.

DUP MLA for South Down Jim Wells told the PA news agency he will get a vote in the party’s leadership contest.

Mr Wells said he was sent official voting instructions from the party headquarters on Tuesday.

There was a question over whether Mr Wells would be allowed to vote in the contest, having lost the party whip in 2018 after criticising the leadership.

Mr Wells said: “I am delighted and pleased that I’m going to get a vote and my vote will be going to Edwin Poots.”

If Mr Wells does get a vote in next Friday’s contest, it will take to 36 the number of members eligible to vote – 28 MLAs and eight MPs.