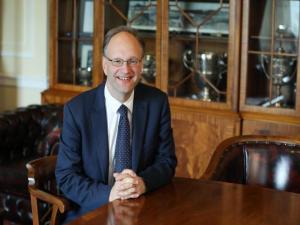 Remote learning in Northern Ireland needs to be as consistent as possible, education minister Peter Weir has said.

He praised teachers for their efforts to deliver lessons online while schools are closed due to the coronavirus outbreak.

Mr Weir told the Committee for Education: "We want to ensure there is as much consistency between schools as possible.

"Work has gone on, teachers have gone above and beyond."

A road map out of lockdown published by the Stormont Executive on Tuesday said schools will not fully reopen to early years pupils until the fifth and final stage.

Schools are currently open to vulnerable children and the children of key workers, and the road map envisaged that would be expanded to cover a wider definition of key workers as workplace activity gradually increased.

Meanwhile, post-primary transfer tests in Northern Ireland have been postponed by a fortnight.

The series of assessments - normally taken by pupils on consecutive Saturdays beginning in early November - will be held between late November and mid-December, the Association of Quality Education (AQE) said.

Mr Weir said: "It is back to the issue around transfer, that we have a range of schools which are over-subscribed.

"Those schools are entitled, if they so wish, to use academic selection."

He added there had to be a time-frame enabling pupils to be able to transfer schools successfully.