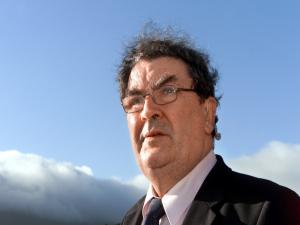 Hume will be laid to rest on Wednesday morning

Former SDLP leader John Hume will be laid to rest later after a funeral in his native city.

The remains of the Nobel Peace Prize winner were carried into St Eugene's Cathedral in Londonderry on Tuesday evening ahead of Wednesday morning's service.

The Derry politician feted around the world as a peacemaker died on Monday at the age of 83 after a long battle with dementia.

In ordinary circumstances, Mr Hume's funeral would have been expected to draw huge crowds, but numbers will be limited due to coronavirus restrictions.

There were emotional scenes outside the cathedral on Tuesday evening as Mr Hume's widow Pat was tightly embraced by family members as she watched her husband's coffin being carried inside. 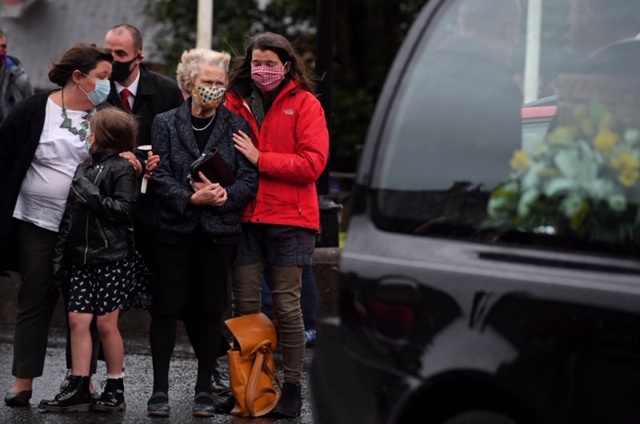 A socially-distanced guard of honour made up of SDLP activists watched on as the procession made its way to the doors of the cathedral.

They held candles in memory of the man hailed for his role forging the Good Friday peace accord.

🎥 SDLP leader @columeastwood is outside St. Eugene’s Cathedral in Derry-Londonderry tonight as the city prepares to welcome the late John Hume back home.

He says the people of Derry stand firmly in solidarity with the Hume family. pic.twitter.com/wcnQnO2SbR

The gesture was replicated in many homes across the island, as people placed candles in their windows in line with a request from Mr Hume's family.

Mr Hume was a key architect of the Good Friday Agreement and was awarded the Nobel prize for the pivotal role he played in ending the region's sectarian conflict.

The funeral service will be broadcast on Wednesday morning by the BBC and RTE.

Yesterday, Q Radio news spoke to some people in the city yesterday who paid their tributes to Mr Hume.

🎥People on the streets of Derry/Londonderry have been paying tribute to the late John Hume.

The former SDLP leader passed away yesterday at the age of 83.

Some have described him as their hero, others say there wouldn’t be peace here if it wasn’t for John. pic.twitter.com/PcURANoO9J

He was a prominent figure in the civil rights campaigns of the late 1960s and also played a leading role in the formation of the credit union movement.

Throughout his political career, he remained steadfast in his commitment to non-violence.

His participation in secret talks with then Sinn Fein president Gerry Adams in the late 1980s and early 1990s was a key catalyst for the nascent peace process.

The SDLP leader faced intense criticism, including some from within his own party, when his dialogue with Mr Adams became public in 1993.

Despite threats to his life, he persisted with his efforts to engage with the republican movement and to convince the IRA to end its campaign of violence.

The highlight of Mr Hume's career came in 1998 with the signing of the historic Good Friday accord which largely ended Northern Ireland's 30-year sectarian conflict.

Along with Ulster Unionist Party leader David Trimble, now Lord Trimble, Mr Hume was awarded the Nobel peace prize for his contribution to stopping the bloodshed.

In 2010, Mr Hume was named "Ireland's Greatest" in a poll by Ireland's national broadcaster RTE.