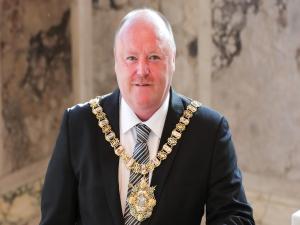 The spirit of co-operation harnessed during the coronavirus pandemic must be built on as Belfast emerges from the crisis, the new lord mayor has said.

DUP councillor Frank McCoubrey was elected the city's first citizen at a council meeting on Monday.

He said he was taking the chains of office in the "most challenging of circumstances".

"Communities across Belfast have demonstrated the true spirit of the city throughout this ongoing pandemic, and I have seen first-hand how people are helping their neighbours and supporting one another," he said.

"It is my hope that there is a ray of light at the end of this, where people and communities will build on this spirit of co-operation and go on to build a better Belfast for future generations. We are a resilient people and a resilient city, and we will get through this, together."

Mr McCoubrey added: "Special tribute must be made to all those who have worked on the front line throughout this crisis - in council, in our health service and emergency services, care homes, and our business community.

Councillor @FMcCoubrey1 has been elected the new Lord Mayor of Belfast

"Many individuals and groups have made such a difference throughout our city, looking after the most vulnerable day after day. They are what makes this city what it is, and we should be eternally grateful to those who have stepped up."

The mayor, who succeeds councillor Daniel Baker in the role, also paid tribute all those who had lost their lives.

"It has impacted so many, so quickly that it has transformed our whole way of life," he said.

"During my term I will make it my priority to determine how we can best remember those who have lost their lives, to offer a place of remembrance and tribute."

Several mayoral positions were elected across Northern Ireland on Monday.

SDLP’s Cllr Brian Tierney is elected Mayor of Derry City and Strabane District for the incoming 2020-21 year. In his acceptance speech he vowed to represent everyone & to campaign for investment for the NW. pic.twitter.com/HAnWUcp05n

The new mayor vowed to campaign for increased investment for the north west, insisting it would be his key priority for the year ahead.

"I intend to be out and about the city and district as much as I can and no area will be left out or indeed favoured over another."