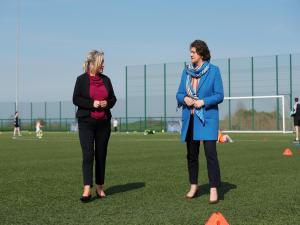 The First and Deputy First Ministers.

Northern Ireland will move out of lockdown restrictions faster than planned, if possible, the First Minister has said.

Speaking on the eve of further relaxations of the coronavirus regulations, which will include the reopening of close contact services, Arlene Foster said the Executive will “keep looking to see if we can move faster”.

But she cautioned that will depend on the impact of the current and imminent relaxations on Covid-19 transmission rates.

Friday will also see the reopening of outdoor visitor attractions, resumption of driving lessons and tests and a return to competitive sports for clubs.

“We have to see what the impact is of relaxations and then make an assessment as to whether we can move dates forward,” Mrs Foster said.

Deputy First Minister Michelle O’Neill urged “caution to go alongside the lifting of the restrictions”.

Earlier, Irish premier Micheal Martin said there will not be “perfect alignment” in the reopening of society in Northern Ireland and the Irish Republic.

The Irish government is not due to announce relaxations until next month.

However, the Taoiseach told Northern Ireland business leaders on Friday that he is in regular contact with Stormont’s first and deputy ministers about the pace of reopening.

He said there will be “some gaps”, primarily due to to the differences in the speed of vaccination programmes in the two jurisdictions.

Ms O’Neill said throughout the pandemic, they have “tried to be as aligned as we can be”.

“Unfortunately just with the way the virus has spread, at different times, we have been at different stages and currently that’s where we are,” she said.

“I’m hopeful that as the vaccination programme rolls out across the 26 counties that we will get back to the point where we will be more aligned and also work together to deal with what is still going to be a challenging period ahead.”

Mrs Foster said the Taoiseach recognised the vaccination programme “made the difference” in terms of Northern Ireland’s progress out of lockdown.

“There is some concern in the fact that there are some cases of the Indian variant in the Republic of Ireland, and we need to keep an eye on that,” she added.

Mrs Foster and Ms O’Neill were speaking during a visit to the Mid Ulster Sports Arena in Cookstown following a meeting of the Stormont Executive.

Mrs Foster said they were delighted to see the young people playing football and the relaxations happening in reality. 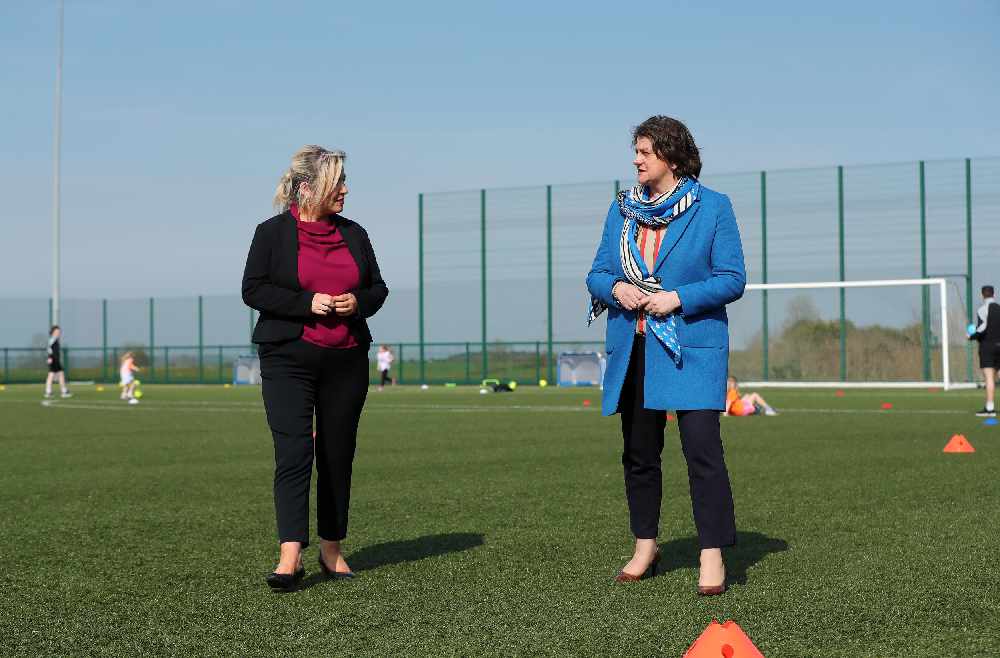 “It is fantastic to be here and see the joy on the youngster’s faces,” she said.

“These are the days we have been looking forward to. There are better days ahead but we just need people to still be careful and be cautious,” she said.

Earlier, Health Minister Robin Swann has said the Covid-19 R number has fallen back slightly once again in Northern Ireland.

“We’re still in roughly the same position as we were in September last year in respect of case numbers and hospital occupancy,” Mr Swann told the Stormont Health Committee.

“The crucial difference now is that the vaccine programme means that the proportion of the population that is susceptible to virus transmission is much smaller.”

On Thursday, there were three further deaths of patients who previously tested positive for Covid-19 in Northern Ireland, as well as another 120 positive cases of the virus.

On Thursday morning, there were 62 confirmed Covid-19 inpatients in hospital, seven of whom were in ICU.