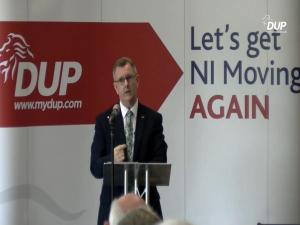 “We, the undersigned unionist political Leaders, affirm our opposition to the Northern Ireland Protocol, its mechanisms and structures and reaffirm our unalterable position that the protocol must be rejected and replaced by arrangements which fully respect Northern Ireland’s position as a constituent and integral part of the United Kingdom”.

Northern Ireland is a constituent part of the United Kingdom of Great Britain and Northern Ireland by reason of the Acts of Union 1800 and the continuing express will of its people.

The Union is both economic and political.

The Belfast Agreement set the conditions on this island for the operation of two separate jurisdictions in order to promote peace, reconciliation and place the people at the heart of any decisions that are made about the sovereign status of Northern Ireland.  The Belfast Agreement gave assurance against change without consent and guaranteed equilibrium as between East/West and North/South arrangements. Yet, under the Protocol the East/West relationship has been severely undermined, again without consent. Furthermore, the Protocol is in conflict with the Acts of Union - as declared recently in the High Court.

The economic union is grounded in Article 6 of the Acts of Union, which guarantees unfettered trade on the same footing between and within all parts of the United Kingdom. The Northern Ireland Protocol fundamentally alters the arrangements within the Belfast Agreement by making Northern Ireland subject to European Union laws and processes of a Single Market for goods, under a European Union customs code and VAT regime, with the rest of our nation decreed a “third country” when it comes to trade and the import of goods.

Economically, the Protocol has inflicted grave damage on many business sectors, which will increase with the end of grace periods. The huge disruption of trade in the supply of goods from Great Britain to Northern Ireland has caused unnecessary supply chain disruption and unacceptable and unsustainable levels of bureaucracy and barriers to trade within our own nation. The resulting diversion and reorientation of trade is destructive of Northern Ireland’s place in the United Kingdom and will result in an economic realignment which is unacceptable.

Through the Northern Ireland Protocol, the European Union asserts sovereignty over economic and trading matters in Northern Ireland, subjecting us to their laws - which we cannot change - and the rule of the European Court of Justice without local political representation, creating a major democratic deficit.

Thus, going forward, any agreement which fails to ensure a proportionate and equitable solution which respects the sovereignty of the United Kingdom and restores our unfettered place within the Internal Market, cannot command the support of the unionist community.