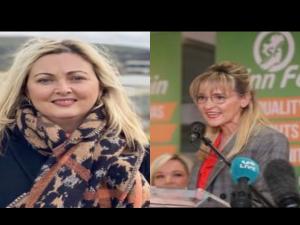 Left Karen Mullan, Right Martina Anderson - Sinn Fein MLAs for Foyle will not stand in the next election

Sinn Fein MLAs Martina Anderson and Karen Mullan have confirmed that they will not stand for the party at the next Assembly election.

The pair were asked to step aside following a party review into recent election disappointments in Derry/Londonderry.

Ms Anderson, a former MEP and junior Assembly minister, said the call for her to step aside had come as a “body blow”.

In a statement on Tuesday, she said: “At the end of last year, the Sinn Fein leadership initiated a party review in Derry.

“One of the recommendations of that review was that the Sinn Fein MLAs should be asked to stand down.

“As a Republican activist for over 45 years, I admit that recommendation came as a body blow.”

However, she said she accepted the decision of the party, and agreed to step down.

“Throughout my life as a Republican, I have always put our struggle first” she said.

“And so in wanting what the leadership believes to be best for it, I have decided not to seek the nomination to contest the next Assembly election.”

It read: “I confirm that I will not be seeking a nomination to stand for @sinnfeinireland at the next Assembly Election.

“It has been a great privilege to represent and work for the people of Derry.

“I will continue to be a SF activist and I look forward to a new chapter in my life.”

🎥 SF leader Mary Lou McDonald has thanked Martina Anderson and Karen Mullan for "their tireless dedication and commitment" after both Foyle MLAs confirmed they will not contest the next Assembly election. The former MEP made her announcement this evening: pic.twitter.com/bRvzcGl0Zy

Ms Anderson said she had received strong support from fellow members, urging her to remain in her position.

She said: “I have been contacted by comrades, friends and supporters from across Derry and beyond offering their solidarity and support.

“The majority have urged me to stay on.

“It has been a difficult time for Karen Mullan and I.

“But no matter that difficulty we have approached this with Republican integrity, and Derry pride.

“This struggle is bigger than any one of us.

“The national leadership correctly wants to re-energise Sinn Fein in Derry and reconnect it to our base.

“Since coming back from Europe, I have sought to do just that, despite me being an MLA for a number of weeks when the global pandemic impacted all my activism.

“It did not deter it, as the hundreds of people I helped can attest.”

She said she would support and work with whoever is selected as the candidate for the next Assembly election.