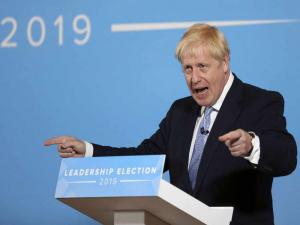 Stormont ministers are to meet later today to consider a plan to ease lockdown restrictions.

The current measures run until May 28th.

It was after Boris Johnson announced a "conditional plan" to reopen society in England and a new slogan of Stay Alert.

FM @DUPleader and DFM @moneillsf in COBR call with @BorisJohnson and FMs of Scotland and Wales.

The Stormont Executive "will consider its plan for a phased, strategic approach to recovery at its meeting tomorrow."

He tweeted: "Just spoke to @BorisJohnson about the address he will make tonight. I made it clear that his new 'Stay Alert' message is a nonsense. I also stressed the need for a cautious plan to move beyond full lockdown. That plan has to include a proper all Ireland testing and tracing system."

Just spoke to @BorisJohnson about the address he will make tonight. I made it clear that his new 'Stay Alert' message is a nonsense. I also stressed the need for a cautious plan to move beyond full lockdown. That plan has to include a proper all Ireland testing and tracing system

He tweeted: "Just off a cross-party call with PM. Expressed our concerns with 'Stay Alert' message, both in terms of substance and mixing the message across UK. Also asked that future of economic measures reflects different circumstances across UK. Plus reinforced need for Brexit extension."

Mrs Foster said there may be slight differences to how the lockdown measures are eased across the UK, but warned that Northern Ireland's would be nuanced.

Northern Ireland's reproductive rate (R0) - the number of people an infected person infects - is currently at 0.8.

Mrs Foster said that is higher than some areas in England and it needs to be driven down before the region can move to relax measures.

Speaking on Sky's Sophy Ridge on Sunday, she said: "We will be looking at some nuanced changes throughout that time and we will await to hear what the Prime Minister has to say today.

"But I think, in terms of the Northern Ireland public, it is important that we continue to protect them and make sure this virus does not start transmitting again in the community in a way that would cause damage to the community."

Mrs Foster said the lockdown could be eased in different regions as Northern Ireland's rate of transmission is higher than other regions in the UK.

"Sage, and indeed our own chief medical officer, do indeed recognise that there are different rates of transmission across the United Kingdom," she said.

Asked if it is a good idea that the lockdown could be re-applied to different regions if required, she said it is important that Northern Ireland moves in cohesion with the rest of the UK.

"It is important that we do what is right in our region of the United Kingdom moving forward. That is why we are coming with our road plan early next week. It will set out how we can take graduated steps back to what will be a different normality."

On Sunday, another five Covid-19 deaths were reported in Northern Ireland, the Department of Health said, taking total fatalities to 435.

A further 41 positive cases were also diagnosed, taking the total number of confirmed cases to 4,119.

Meanwhile, the Prime Minister outlined his aim to ‘begin the phased reopening of shops’ in England in early June