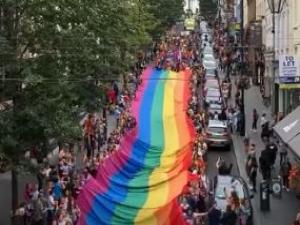 Thousands turned out in Derry/Londonderry today to celebrate Foyle Pride.

A sea of colour as the Foyle Pride march makes its way down Shipquay Street in #Derry this afternoon #FoylePride pic.twitter.com/50r3pZcltG

A parade left from the Waterside railway station which saw a vibrant and colourful sea of people, many holding heart shaped placards with their faces painted in rainbow colours, march through the city.

It followed the route of the 1968 Civil Rights March from Duke Street, along the Craigavon Bridge and towards the city's Guildhall.

The Mayor of Derry City and Strabane, Michaela Boyle led the parade this year.

She described the event as a "fabulous" celebration of love:

One of the organisers of Foyle Pride Sha Gillespie told Q Radio it was a proud day for the gay community.

She said, "It's a really, really proud day for us all and it means basically being on the streets and everybody being happy and it's a family day.

"It's such a beautiful thing to see today, rather than your usual parades happening in Derry.

"We have this wonderful colour of people out.

"I'm really, really proud to be a queer woman today".

Atmosphere is electric in the Guildhall Square this afternoon as crowd of thousands celebrate #FoylePride #Derry pic.twitter.com/bzSGlMqVXP