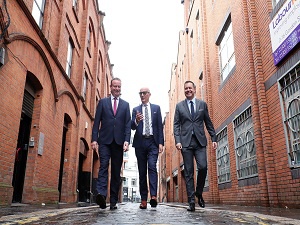 A group of trade bodies have come together to create a plan which they say can create 65,000 jobs and boost Northern Ireland's economy.

Vision 2030 will be launched at a reception at Westminster on Wednesday which is expected to be addressed by Secretary of State Julian Smith.

The 10-year plan created by Trade NI aims to break the "cycle of limited economic growth" in the region.

The group said its economic plan will set out policy priorities with the potential to create 65,000 jobs and make Northern Ireland a high-growth economy.

It expressed concern at the uncertainty around Brexit and the collapse of the Northern Ireland Assembly, and stressed that any new executive must increase the productivity of the workforce, reduce the regulatory burden on businesses, increase skills, and deliver a clear economic strategy.

"Northern Ireland is facing a huge challenge as it struggles politically and economically with a growth forecast of around 1% or below," they said.

"This is simply not good enough and we can't sit idly by and let events overtake us. We must break the cycle of limited economic growth.

"Our three organisations represent most of the businesses that make up private sector jobs in Northern Ireland. Therefore, a louder voice needs to be heard on their behalf so that they don't suffer in the wake of the local political issues.

"We want a reboot of the economic policy of Northern Ireland in order to benefit our economy and safeguard our growing business community."

The trio, who said they want to transform Northern Ireland into an "ecosystem of innovation", said they are expecting a large turnout for the event at Westminster including business leaders and politicians.

"We are not isolated from the fact that this report has been launched at a time of political upheaval," they said.

"Our day of engagements in London should send a clear signal to our own MPs, wider elected representatives and the British and Irish governments that the economic health of Northern Ireland must be a priority."

Mr Smith welcomed the move, saying: "There is so much potential in so many sectors in Northern Ireland, and I'm pleased the Government will be able to provide support such as through city deals and growth deals.

"Now we need to get Stormont back up and running, so that important decisions can be made to support businesses and create jobs and growth."