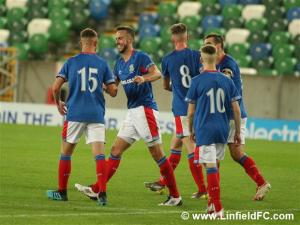 15-year-old winger Charlie Allen started for the Blues, while fellow schoolboy Dale Taylor, also 15, came on as a second-half substitute.

The Reds had a 4-0 victory over Knockbreda in one of the seven ties played on Tuesday night.

Holders Crusaders launched their defence with an 8-1 victory against Amateur League Sirocco Works.

The only shock was the Welders winning 2-1 away to Carrick.

Meanwhile, Premiership sides Coleraine and Institute both crashed out of the North West Cup.

And a much-changed Portadown lost 6-1 against local rivals Annagh United in Mid-Ulster.

History Maker ⚽ | Charlie Lindsay is now officially the youngest player ever to play for Glentoran. Born on the 17th March 2004 Charlie is just 15 years of age! #TimeToClimb 💚🐓 pic.twitter.com/min2ifrXx4

The line up for the Quarter Final of the https://t.co/4MQjoyjLMM Co Antrim Shield is confirmed. Ties to be played on Tuesday 15 October. pic.twitter.com/0AbAZKNI4K

Crusaders produced one of the shocks of the Danske Bank Women’s Premiership season as they ended Glentoran’s slim title hopes.

Northern Ireland international Julie Nelson grabbed a double for the Crues in East Belfast and while Makyla Mulholland netted a late consolation for the Glens, Spike Hill’s side held on for the points in a 2-1 success.

The top two sides, Sion Swifts and Linfield, both kept their title challenges on track with routine victories - defeating Comber Rec and Cliftonville by scorelines of 12-0 and 5-0 respectively.

Jamaica international goalkeeper Nicole McClure was among the scorers for Sion - with a penalty - while Ciara Grant hit a hat-trick.

Casey Howe netted either side of the break for the Blues at New Midgley Park before Rebecca Bassett, Kirsty McGuinness (penalty) and substitute Rebecca McKenna completed the comprehensive victory.

Sion retain a four-point lead at the top over Linfield, who have played two games fewer and have three matches of their league campaign remaining.

Linfield’s trip to Glentoran on Saturday evening may prove definitive for the destination of this season’s league title.