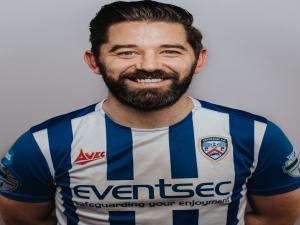 The attendance has been restricted and Covid-19 protocols will be in place at the Showgrounds.

Stripes striker Curtis Allen says getting back on the pitch at all is a huge boost:

He says if all goes according to plan, it promises to be a great season:

Meanwhile, Coleraine boss Oran Kearney has been named NI Football Awards Manager of the Year for 2019/20.

The other five matches are being played tomorrow.

And there'll be a repeat of Reds v Glens in the County Antrim Shield semis:

Ties to be played on Tuesday 3rd November, 7.45pm pic.twitter.com/bEDcd28FD5

Derry City's scheduled League of Ireland game at Shamrock Rovers this evening has been postponed.

It's after a second player with the Dublin club tested positive for Covid-19.

A number of other squad members have been identified as close contacts and are self-isolating.

It was announced on Thursday, all football here outside elite level is suspended from 6pm today:

⚽️ All football training and matches below elite level will be suspended from 6pm tomorrow due to the new #COVID19 restrictions.