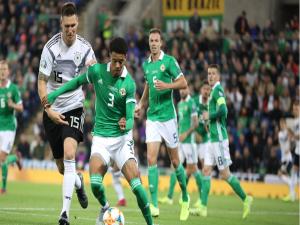 Jamal Lewis on the ball for NI. Pic: Irish FA.

Northern Ireland suffered their first defeat of the Euro 2020 qualifying campaign as Marcel Halstenberg's thunderbolt sent Germany on their way to a 2-0 win in Belfast on Monday night.

The first of four crunch fixtures against the powerhouses of Group C - Northern Ireland face The Netherlands in Rotterdam next - ended in defeat after Serge Gnabry rolled in a second in stoppage time, but the 18,000 fans packed into Windsor Park will hardly have been discouraged given their side's display.

Michael O'Neill's men played with heart and desire as they were roared on by a boisterous crowd, but Germany moved up a gear after the break. They go top of the group, Northern Ireland slip to second on goal difference, three points ahead of Holland who have a game in hand.

The opening goal was a moment of pure quality as Halstenberg met Lukas Klostermann's deep cross with a powerful half-volley that flew past Bailey Peacock-Farrell.

Well, you have to hand it to him for the finish. #GAWA coming up. @NorthernIreland https://t.co/HJ5zk4K039

For the opening 45 minutes, Northern Ireland tested Germany's resolve in the wake of their conceding four second-half goals in defeat to the Netherlands on Friday night. The Germans have never lost back-to-back qualifiers but they certainly looked unnerved in the opening exchanges as Northern Ireland poured forward.

Conor Washington poked just over in the sixth minute and was then denied by a fine save from Manuel Neuer after an uncharacteristic mistake from Kroos.

Germany gradually began to take the sting out of the atmosphere as they hogged possession and created chances of their own, with George Saville taking the full force of a Kimmich strike which he blocked on the edge of the area.

A dramatic end to the first half then followed. Stuart Dallas' low cross caused a goalmouth scramble but Neuer somehow emerged with the ball as Washington could not stretch far enough, while Peacock-Farrell made a point-blank save from Werner as Germany tried to hit them on the break.

But for all Northern Ireland's hard work in the first half, Germany needed only three minutes to open the scoring in the second. Peacock-Farrell had already made a good save to deny Klostermann in the opening seconds but there was nothing he could do when Halstenberg met Klostermann's deep cross moments later.

It might have been worse moments later but the Burnley stopper denied Brandt before Klostermann fired wastefully over on the follow-up, while Gnabry poked the ball just wide from a counter-attack.

Germany were in full flow now and Peacock-Farrell made an excellent save to push Werner's low shot just around the post after a neat combination with Marco Reus.

Northern Ireland regrouped and were screaming for a penalty when Paddy McNair hit the deck on the hour, and then saw Dallas fire just wide from substitute Gavin Whyte's cross.

Gavin Whyte off the bench and on fire at Windsor - not over yet #GAWA still in fine form, they believe!!! pic.twitter.com/5iJ74lB51f

O'Neill threw on Josh Magennis and young Linfield striker Shayne Lavery in the closing stages but it was Gnabry who had the final say, beating the offside trap and then Peacock-Farrell from a tight angle in the third minute of time added on.

🎥 From one Windsor Park legend to another @OfficialBlues star @Andy_Waterworth congratulates @StevenDavis8 on becoming @NorthernIreland most capped outfield player - 113 not out! pic.twitter.com/G57cVK4PoN

🎥 So is the Euro 2020 game up for @NorthernIreland after heroic defeat v Germans? Here’s the view from Fermanagh and Ballymoney - it’s not over till it’s over! #GAWA Reports & reaction on air am pic.twitter.com/J6Q1YUgKjJ

It's a return to domestic action on Tuesday night with seven County Antrim Shield ties.

There are also North West and Mid Ulster Cup games.