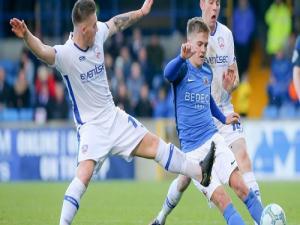 Preparations are being ramped up as football here gets ready for a return to action after four months of lockdown.

The Irish FA has announced the registration period for signing new players in professional football in Northern Ireland will run from 1 August to 5 October.

After snapping up Sean Ward from Crusaders, the Lurgan Blues boss has brought in former Coleraine striker Matthew Fitzpatrick and winger Peter Campbell from Loughgall.

There are also reports some big names could be on the move during the new window.

The Irish Cup semi-finals remain on course to be played behind closed doors at Windsor Park on Monday July 27th.

Coleraine take on Ballymena at 4pm followed by another derby clash - Glentoran v Cliftonville at 8.

They are both played to a finish with the respective winners meeting in the decider on Friday July 31 at 8pm.

There's scheduled to be some football before that, with Junior Cup semi-finals next Monday, July 20th.

The County Antrim association is also getting into gear, issuing this statement:

"The Co Antrim FA is pleased to announce that the Toals Junior Shield Semi Finals will be played at Seaview Stadium on Saturday 25 July with kick off times of 2.30pm and 6.30pm. The Final of the competition will also be held at Seaview on Wednesday 29 July with a kick off time of 7.45pm.

"All fixtures will be played behind closed doors however the Association is exploring options of streaming the game live for supporters. The Association will confirm the line up of the respective semi final fixtures later this week. Harryville Homers, Ahoghill Thistle, East Belfast II and Shamrock FC are vying to win the famous Shield."