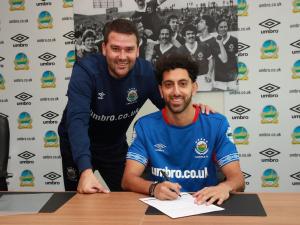 Defender or midfielder Conor Pepper has also switched from the Oval to Windsor Park.

Glens boss Mick McDermott has reacted to the Nasseri move, telling the club website: "We were prepared to keep him, but you reach the point when what a player wants is well beyond what is reasonable and is out of synch with what our best players are on."

Larne have also dipped into the transfer market, for an ex-Crusaders and Derry City player:

Derry City are back in League of Ireland action on Monday night, against St. Pat's in Dublin (7.45pm).

The Candystripes are aiming to bounce back from Friday's 2-0 defeat to Sligo at the Brandywell in their first match since lockdown.