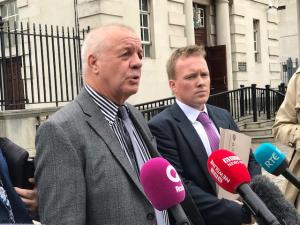 Brexit has lit the fuse on a stick of dynamite under the Good Friday Agreement, Appeal Court judges in Belfast have been told.

A legal challenge against a no-deal exit from the EU is seeking to "extinguish the fuse" before Northern Ireland's historic peace accord is destroyed, Barry McDonald QC said.

Mr McDonald was appearing for one of three applicants who are appealing over a High Court judgment that rejected their challenge against the Government's handling of the Brexit process.

Last week in the High Court in Belfast, Lord Justice Bernard McCloskey said the issues raised by the three joined cases touched on political matters that the courts should not intervene on.

On Monday, all three were before a panel of three Appeal Court judges, led by the region's Lord Chief Justice Sir Declan Morgan.

Appearing for an anonymous applicant, Mr McDonald argued the European Union (Withdrawal) Act passed by Parliament in 2018 compelled the Government to seek a deal that protected north-south co-operation on the island of Ireland and ensured there was no new border infrastructure erected.

He said an exit that resulted in a hard border would run contrary to the "will of Parliament".

Summing up, Mr McDonald warned Brexit could have a major negative impact on the peace process accord.

"This has lit a fuse to a stick of dynamite under the Good Friday Agreement," he said.

"And we are trying to extinguish the fuse at this stage."

Another of the applicants is victims' campaigner Raymond McCord.

His barrister Ronan Lavery QC said if a Brexit extension could not be secured by the Government in the absence of a deal then the default position should be halting Brexit - through the revocation of Article 50 - rather than exiting with no deal.

"A no-deal is completely incompatible with Northern Ireland's constitutional position."

While his barrister was arguing Northern Ireland-specific points related to his case in the Appeal Court on Monday, Mr McCord is also set to go before the Supreme Court later this week on the separate issue of the prorogation of Parliament.

Mr McCord will be heard as an "intervenor" in the Supreme Court case assessing the challenges against the Government's decision to suspend Parliament that were heard in Scotland and England.

His appearance has been scheduled for Thursday.

🎥 Northern Ireland will be part of the UK Supreme Court prorogation challenge which starts in London tomorrow. NI submission due to be heard on Thursday. Brought by victims’ campaigner Raymond McCord who's also challenging a no-deal Brexit. Here’s his lawyer Ciaran O’Hare... pic.twitter.com/AMdyDN01NQ

Dr Tony McGleenan QC, representing the Government in the Court of Appeal on Monday, insisted it was not acting contrary to peace process agreements.

He said the Brexit negotiations involved the "sphere of high policy" and the Government should not be constrained in its negotiating strategy by an act of Parliament.

Dr McGleenan made clear the Government's desire was for a deal, with "alternative arrangements" replacing the contentious border backstop.

"The policy is still to achieve a Withdrawal Agreement," he said.

David Scoffield QC, representing the third applicant Jamie Waring, rejected the Government's contention that it should be allowed to pursue its own negotiating strategy without being constrained by Parliament.

"If we have to wait until a no-deal has been secured by one way or another it will be too late to put the horse back in the stable or the cat back in the bag," he said.

At the close of the day-long hearing, the three judges reserved judgment.

Sir Declan said they would take time to reflect on the arguments made by the three applicants in the case and the Government's response.

The region's top judge said he could not guarantee a judgment would be delivered this week but expressed hope a ruling would be ready before the end of the month.

"We'll try to give a judgment as soon as we can," he said.