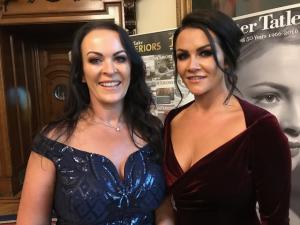 A leading Northern Ireland businesswoman has called for MLAs to earn their pay and get back to work.

Apprentice star Grainne McCoy has been speaking exclusively to Q Radio about the stalemate at Stormont.

It follows the government's decision to cut Assembly members' salaries by almost £14,000.

Part of Grainne's work is to help inspire young people to find employment.

She believes local politicians should set a better example...

. @bbcapprentice star @grainnemccoy_ calls on MLAs to earn their pay and get back to work ASAP. "Our businesses are struggling, our younger generations are struggling...if we could have our government back please that would be amazing!" More on air at 8. pic.twitter.com/9sJiJVfKNO

Grainne was speaking at Thursday night's Ulster Tatler awards at Belfast City Hall where she was nominated for Businesswoman of the Year.

Actor Ciaran Hinds was honoured with a Lifetime Achievement Award.

Superbike champion Jonathan Rea was Sportsperson of the Year...