All You Ever Wanted

LISTEN: Man arrested in connection with woman's death at house in Newry 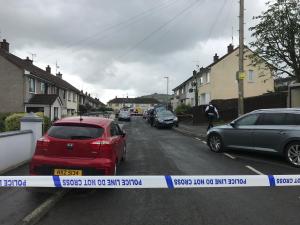 The scene at Drumalane Park in Newry

Police are conducting an investigation into the circumstances surrounding the death of a woman in Newry.

The 20-year-old was found dead in her home in the Drumalane Park area this morning.

Earlier, officers said her death was being treated as suspicious and that a post mortem examination would be conducted to establish the cause of death.

Meanwhile, a 23-year-old man has been arrested in connection with her death.

The PSNI says the investigation is at an early stage and officers are not looking for anyone else at this time.

The scene at Drumalane Park in Newry where a woman was found dead in her house this morning.

Police are investigating the circumstances surrounding her death and say it is being treated as suspicious.

A post mortem is due to be carried out in due course. pic.twitter.com/hZUXq9pcQw

Meanwhile Newry and Armagh MP Mickey Brady has said the local community is in shock after the discovery of a woman's body in Newry.

"News that the death of a woman whose body was found at her home in Drumalane Park in Newry is being treated as suspicious has shocked the local community.

"I want to express my condolences to the family, friends and loved ones of the woman who has died at this sad time.

"A police investigation is now underway and anyone with information on what happened should get in contact with the PSNI."