Oops...i Did It Again

GoT drink drama truth is out there, rogue 'coffee' was green tea made in Banbridge 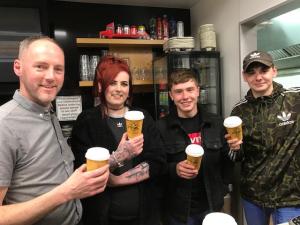 Pierre with staff Rebecca, Jordan and Jacque - and cups!

A County Down businessman has revealed the story behind the mysterious takeaway coffee cup that recently made a surprise appearance on Game of Thrones...

The gaffe went global when the product from a different era was accidentally filmed sitting on a table in front of star Emilia Clarke's character  Daenerys Targaryen.

The cup was linked to big US coffee chains, but it's now emerged it was a green tea sold at a Banbridge restaurant.

The Game of Thrones cast and crew have been regular customers when shooting scenes at nearby studios.

Captain Cooks owner Pierre Conlon admits the drama has caused a bit of a stir...

Pierre says they intend to make the most of their new-found fame...

🎥 GoT Green Tea! Pierre Conlon on 'coffee' cup making surprise appearance on @GameOfThrones - reveals it was a takeaway tea from his place in Banbridge, a regular haunt for GoT cast & crew. It’s all caused a bit of a stir! More on air & https://t.co/boX2EdCtC7 #GameofThrones pic.twitter.com/Kqg9z6q5ft

The latte that appeared in the episode was a mistake. #Daenerys had ordered an herbal tea. pic.twitter.com/ypowxGgQRl

'The cup is not from Starbucks, but the association is a testament to its brand’s strength.'

Starbucks got an estimated $2.3 billion in free advertising from ‘Game of Thrones’ gaffe, and it wasn’t even its coffee cup https://t.co/tEPKKqNXCF

They left a Starbucks coffee cup in Game Of Thrones pic.twitter.com/U9Fdog0vs9