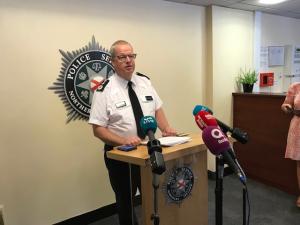 Northern Ireland's police chief has warned that a hard Brexit will have a "detrimental" impact on the peace process.

Simon Byrne painted a stark picture of a potential worst-case scenario of farms and agricultural businesses going bust, animals being culled and unrest within communities.

The chief constable's warning came a day after Taoiseach Leo Varadkar predicted the UK was facing decades of economic decline following Brexit, as the nation struggled to cope with diminishing importance on the world stage.

Mr Byrne, who assumed office at the start of the month, said he wanted answers from London as to how the PSNI was supposed to police around 300 border crossings in the face of the dissident republican threat that would escalate if there was a disorderly UK exit from the EU.

"I think we are worried that in the short term a hard Brexit will create a vacuum which becomes a rally call and recruiting ground for dissident republicans and clearly any rise in their popularity or their capability would be very serious," he said.

Mr Byrne said his officers were having discussions with senior civil servants to "make plain" the PSNI's concerns.

🎥 Stark warning: @PoliceServiceNI @ChiefConPSNI warns hard Brexit would have detrimental impact on peace process & is “worried it would create a vacuum, a rally call, recruiting ground for dissident republicans - any rise in their popularity or capability would be very serious” pic.twitter.com/i2SUXJamix

"We are and I am concerned about how the Brexit piece may or may not play out in weeks ahead," he said.

"Firstly we are all in the same place that we don't quite know where things will go and we have prepared as well as we can, both as a PSNI and with other organisations

"But on specifics if we have a hard border the question I have for London, frankly, is how do we police that hard border?

"You'll know how many crossings there are between the two countries, nearly 300 - and that's the official ones. So I think it raises a whole raft of issues around the potential for smuggling.

"If we go into the worst-case scenario apart from the policing dimension my personal concern is for example understanding the effects on agriculture here, which so important. If tariffs change and drop we will see the prospect of animals being culled and people going out of business, that may lead to unrest and we having to protect other agencies as we go to support new arrangements.

"The minute we go into the border in that regard our worry is my officers and staff become a target for dissident republicans."

During a press conference in Belfast, Mr Byrne was asked if a hard Brexit would have a detrimental impact on the peace process.

In an interview on Friday, Mr Varadkar told Newstalk radio that the UK would "fall into relative economic decline for many decades, probably be overtaken by France again. Slowly over time, it'll be overtaken by lots of countries in Asia".

He added: "I think that one of the difficulties for Britain is that they're struggling to cope with the fact that as a country and an economy they're not as important in the world as they used to be."