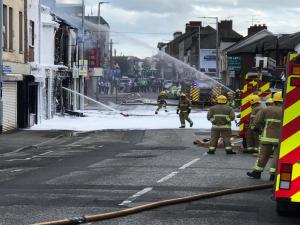 A major fire has broken out at a furniture shop in Ballymena.

Extensive damage has been caused at Woodgreen's store on Broughshane Street.

The Northern Ireland Fire and Rescue Service says four commercial premesis have been gutted, and officers will remain on scene overnight.

Broughshane Street in Ballymena will remain closed overnight because of an earlier fire. Motorists advised to seek alternative route.

The area's been cordoned off with Traffic being diverted away from the area at the Chapel roundabout.

Motorists are being asked to avoid the Broughshane Street, William Street and Broadway Avenue areas of the town.

Almost 60 Firefighters and eight appliances were on the scene at the height of the blaze.

Scene from a Broughshane Street Ballymena a short time ago. Up to 60 firefighters involved and several businesses gutted. pic.twitter.com/4CbPaeMh6b