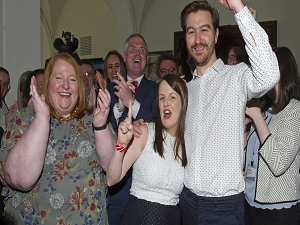 The Alliance Party's Nuala McAllister (centre) celebrates as she is elected for the Castle area during the local government election count at Belfast City Hall. PRESS ASSOCIATION Photo.

There has been a surge in support for Northern Ireland's smaller parties in the local government elections.

Alliance and the Greens have topped the polls in many areas, picking up additional seats in a number of councils.

However, the political landscape in Northern Ireland stays much the same as the Democratic Unionist Party remains the country's largest.

The unionist party gained 24.1% first preference votes - up by 1% - leaving it with around 114 seats with more to be declared.

Sinn Fein suffered a slight dent to its support base with 23.2% first preference votes - a drop of 0.8%. It is expected to take around 100 council seats.

Unexpected victories and a surge in votes for the middle ground Alliance party saw its share of votes rise from 6.7% to 11.5%.

The Green party and independents also made significant gains across the 11 councils.

The Green party's Mal O'Hara was elected to Belfast City Council in what has been a hugely successful election for his party in Northern Ireland's capital.

Holding a rainbow flag, he celebrated with a kiss from his partner and a hug from party leader Clare Bailey. 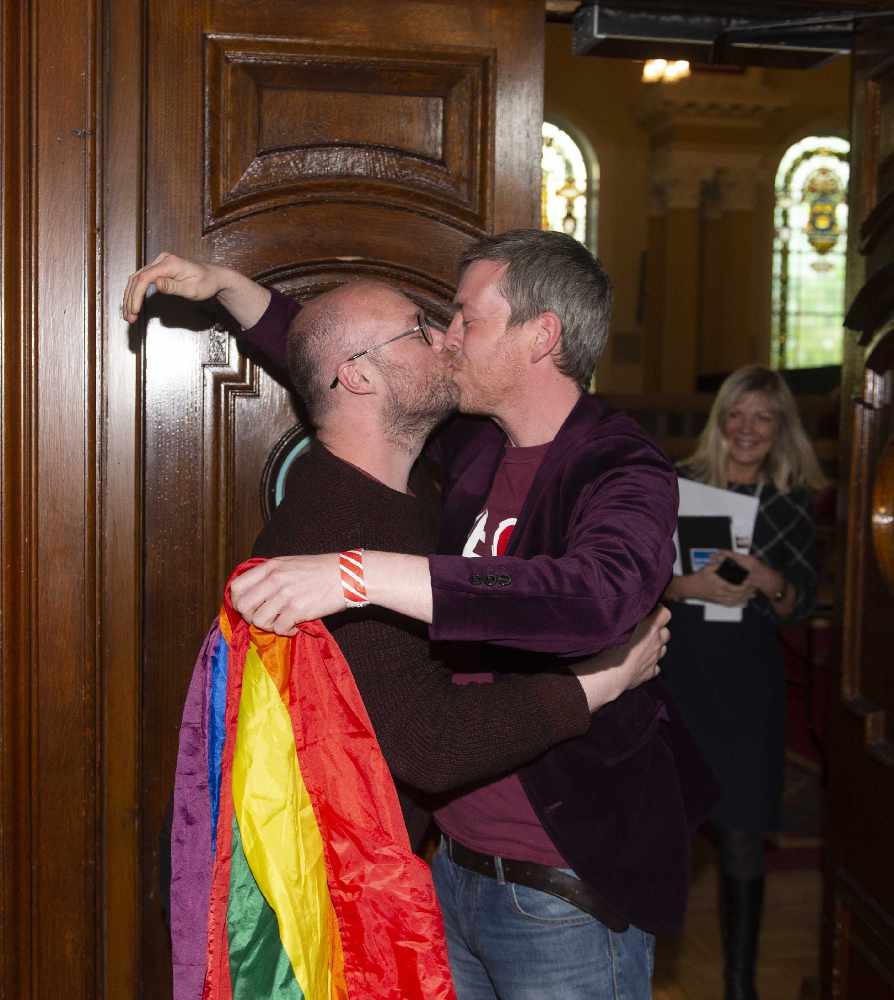 (Michael McCartan celebrates with his partner Mal OHara (right) of the Green Party at the local government election count at Belfast City Hall. )

Around 435 seats have been filled with just under 30 councillors waiting to be elected.

The Ulster Unionist Party suffered some of its biggest causalities with the loss of high-profile Belfast councillor Jeff Dudgeon.

In a disastrous election for his party in Belfast, Mr Dudgeon was eliminated on the third stage of the count.

The SDLP also lost some of its seats after gaining 12% of first preference votes - a drop of 1.6%.

In Omagh, a former MP who resigned after angering relatives of 10 Protestants shot dead in a sectarian massacre won a council seat.

Barry McElduff was forced to resign his Westminster seat last year amid an outcry after he posted a video of himself balancing a loaf of Kingsmill bread on his head.

SF Barry McElduff says he has taken responsibility for his actions, which he claims were accidental, after posting a controversial video relating to the Kingsmill massacre. Now the latest member of @fermanaghomagh, he says he’s moving forward respectfully and dignified: pic.twitter.com/n3u36LtkN4

It was posted on his Twitter account on the anniversary of the Kingsmill atrocity, which saw 10 workmen shot dead by republicans in Co Armagh on January 5 1976.

DUP leader Arlene Foster said she did not believe Mr McElduff has recognised the hurt and pain he caused to victims in Northern Ireland.

John Finucane was elected on the first count of the Castle district electoral area - which encompasses parts of north Belfast - with 1,650 votes, just behind the Alliance Party's Nuala McAllister, who attracted 1,787 votes.

The leader said her party will look at a number of issues including "bad behaviour" by members after the local elections have concluded.

It comes after Mr Wells said his former leader, the Rev Ian Paisley, would have been "aghast" at the decision to run gay DUP candidate Alison Bennington.

The DUP's founder once led a campaign to, in his words, "Save Ulster from Sodomy" and prevent the decriminalisation of homosexuality.

Mrs Foster said Mr Wells should not have made the comments to the media.

He is considered one of the public faces of dissident republicanism in Northern Ireland.